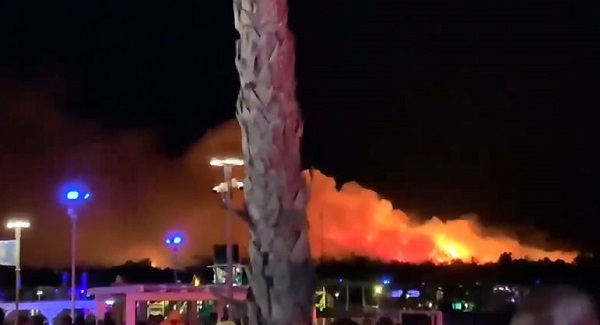 Croatia’s Fresh Island Festival had to be evacuated following a forest fire which broke out near the venue.

News reports and videos shot by concert-goers below reveal the blaze that disrupted the busy music event.

According to The Hollywood Reporter via the NME, the hip-hop festival which takes place Zrće Beach on the island of Pag. and had to be cancelled on Monday night, July 15th after the fire broke out in a nearby forest.

Festivalgoers were evacuated using shuttle buses departing from another venue, Noa Club, towards the town of Novalja.

However, according to reports on social media, the festival said that local police were forced to shut the road to Novalja and Zrće Beach is presently closed.

In a statement organisers said:

“We advise everyone to remain close to Noa Club main road entrance and not to attempt to make their way back to the town until the emergency services have provided further information on the situation. Once again we really appreciate everyone’s patience during this time.”

Fresh Island is lit. I mean on fire pic.twitter.com/g4GXsfQXfF

Fresh Island is lit. I mean on fire pic.twitter.com/g4GXsfQXfF

The wildfire at Fresh Island Festival right now is mad. Whole thing been locked off pic.twitter.com/qUCu2QPodw

The Velvet Underground Documentary By Todd Haynes To Be Released