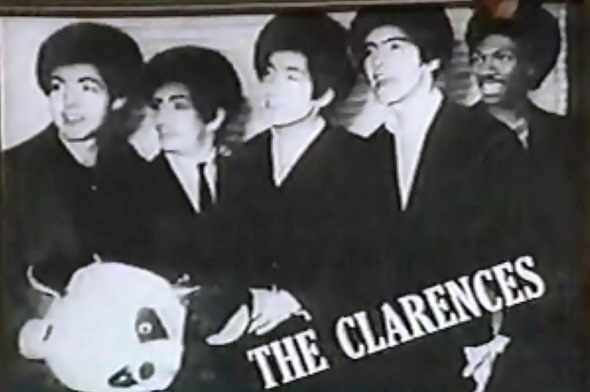 Before the Beatles became famous, they had a fifth member, a saxophone player. At least that’s the claim made by Clarence Walker!

He’s a fictional character created by Eddie Murphy when he was on Saturday Night Live. According to UCR, Clarence made an appearance as a guest on a talk show.

The show was called Rock & Roll & Then Some, on February 11, 1984 hosted by Buzzy Free, who was played by cast member Joe Piscopo.

That same week marked the 20th anniversary of the Beatles’ coming to  America, so to mark the occasion, Buzzy invited Clarence to discuss his claims that the group’s music and image was down to him.

He went on to say, “I been lookin’ for them boys since 1962, and that’s why they got that around-the-clock security in their house, ’cause they know that when Clarence Walker find ‘em, he gonna take a chunk out of their behind.”

Clarence Walker even has a photo of the group with him in the middle as proof. He tells Buzzy that his vocals and saxophone was removed from their songs.

Clarence had another photo from 1961 when the band all sported Afros and called themselves The Clarences.

He had a cassette that featured saxophone and Clarence’s vocals on “I Want to Hold Your Hand” and a spoken-word section on “Love Me Do.”

Buzzy needed some convincing, so finally when Clarence plays the tape backward, it reveals John Lennon and Paul McCartney agreeing to fire the saxophonist and steal his ideas.

The sketch also included a scene from All You Need Is Cash, a 1978 TV movie produced by Lorne Michaels, about the Rutles.

They were a Beatles parody group led by Monty Python’s Eric Idle, who plays a documentary filmmaker who goes to New Orleans to find the roots of the band’s music.

On his travels, he meets Ruttling Orange Peel, a blues musician who claims that someone came into his house and took all of his songs.

However, according to his wife, she says her husband repeats the same story when filmmakers drop by. “Last week, he claimed he started the Everly Brothers, Frank Sinatra and Lawrence Welk.”

Leaving the laughs aside, there is one musician who really did claim he did play on some of the early Beatles records and received no credit.

Drummer Max Weinberg of The Big Beat, E Street Band, who wrote a book filled with interviews of artists who had influenced him, revealed that Bernard “Pretty” Purdie claimed he played on 21 songs by the Fab Four, as well as tracks by the Rolling Stones, the Animals and the Monkees.

That’s because the original drum parts were “way off.” Purdie did not give the names of the tracks, as his silence had been bought by Beatles manager Brian Epstein.

“They paid me for my month’s work, for working on the tracks” adding, “Two or three weeks later, Epstein called and said, ‘Listen, I don’t want this business getting out in the street.’ And I said, ‘What are you talking about?’

He said he wanted reassurance that I’d keep my mouth shut. He said, ‘And I think this will reassure it.’ He handed me a check.” Purdie went on to say that he would never reveal the names, unless he needed the money, at that point Weinberg quickly changes the subject.