Home News ‘War Is Over’ Gets Fresh Refrain From Wicklow Pupils 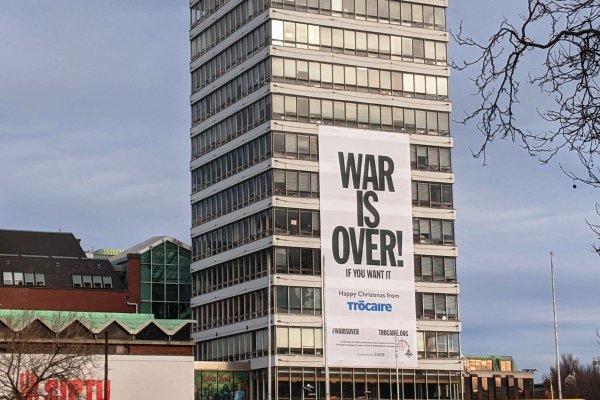 John Lennon and Yoko Ono’s iconic ‘War is Over‘ campaign has been reimagined as part of Trocaire‘s Christmas Appeal to raise funds for families who live in war-torn countries around the world.

It’s 50 years since John Lennon and his wife Yoko Ono launched the famous ‘War Is Over’ campaign, which saw them place the slogan on billboards in 12 cities around the world.

Now in 2019, students from the Holy Cross National School in Co. Wicklow gave their own rendition of the song to help Trocaire launch their Christmas appeal.

Principal Mary O’Riordan explains how they got involved…

Trocaire has recreated the billboard in Liberty Hall in Dublin, while all the students involved today held up signs saying ‘War Is Over’ in both English and Irish.