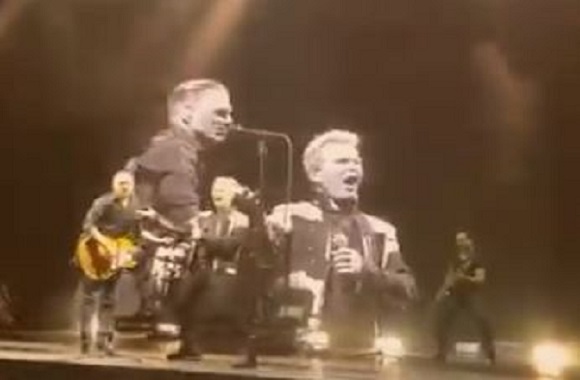 Billy Idol and Bryan Adams appeared together last Saturday night to sing a duet of the Eddie Cochran classic “C’mon Everybody”. They appeared onstage together at the PNC Bank Arts Center, Holmdel, N.J.

They are both currently performing on Shine a Light tour, sharing the headline. The tour named after Adams’ latest album started on Aug 1st and ended last night.

According to UCR, it wasn’t the first time that Idol and Adams have come together to share the limelight, they had performed the same song as a duet a couple of times during their tour schedule and way back in Germany at a performance in 2014.

Adams was in the news earlier in the year when he announced that he was a victim of the Universal Music fire. A number of unknown artists’ archive material was lost in 2008.
He revealed that the news of the incident had been kept from him, even when he tried to locate material for a possible box set:

“I contacted the archive dept of Universal Music, I called everyone — former A&M employees, directors, producers, photographers, production houses, editors, even assistants of producers at the time.”

“I can tell you with 100 percent certainty that I couldn’t find anything at Universal that had been published to do with my association with A&M Records in the 1980s. … If you were doing an archaeological dig there, you would have concluded that it was almost as if none of it had ever happened. … There was no mention that there had been a fire in the archive.”

Adams’ will continue the North American tour without Idol until Sept. 21.

What a great show !! He was awesome !! pic.twitter.com/zelHmhUUwz