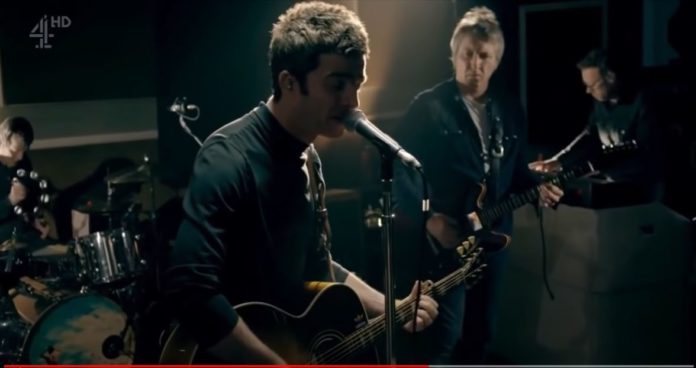 Noel Gallagher appeared on CBS This Morning over the weekend, where he sang some tracks live with his band Noel Gallagher’s High Flying Birds.

One of these tracks included “Don’t Look Back In Anger”. Check out that performance here.

Gallagher and his band also performed their recently released track “We’re On Our Way Now”, which features on that album.

“We’re On Our Way Now” features alongside other tracks “Back The Way We Came” and “Flying To The Ground” on that new album.

Recently, Gallagher called “Flying To The Ground” “literally the best thing I’ve released since the last thing I released”.

“If Burt Bacharach wrote for Motown this is what it would sound like…only not as good…obviously”, he added.

On top of this, Gallagher’s High Flying Birds also performed the track “Holy Mountain”, which featured on the band’s 2017 album “Who Built The Moon?”.

As well as performing, Gallagher also spoke about what he has been doing during this pandemic and his music career.

“Don’t Look Back In Anger”

Back in February, Oasis marked the 25th anniversary of “Don’t Look Back In Anger”. To mark this milestone, the band released a lyric video for “Step Out”, one their B sides.

“(What’s The Story) Morning Glory?” is the biggest selling UK album of all time, having sold 22 million copies worldwide.

Speaking of Oasis, Noel Gallagher said that he would reform the band for £100 million. He does not believe that that the music industry has enough money to reform the band. More on that here.

Last week, Noel Gallagher also took aim at Prince Harry, branding the Duke of Sussex a “f*****g woke snowflake”. He added that he feels sorry for Prince William as he said that he has a little brother known for“shooting his f***ing mouth off”.

Check that report from Nova here.

Listen To The Doors’ ‘L.A Woman’ In Full Tonight From Midnight