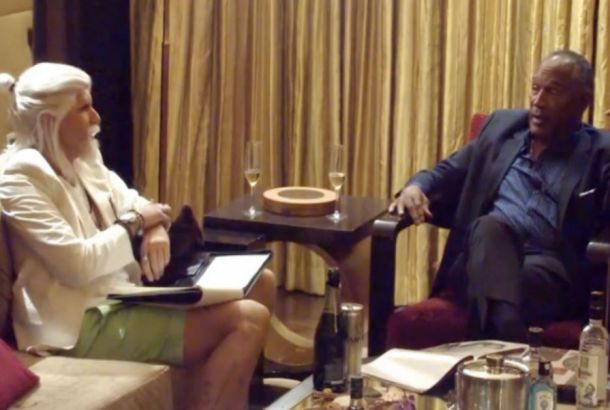 Sacha Baron Cohen’s This Is America ended last night with a highly controversial scene that saw the comedian attempting to draw a murder confession from O.J. Simpson. There’s video footage of the intense moment below!

The Showtime series has had a controversial time on air, with Baron Cohen focussing on high profile figures including former Vice President Dick Cheney and former Chief Justice Roy Moore. It looks like he’s kept the most controversial skit till last, after a meeting between Baron Cohen and Simpson finally happened.

In the clip, which was apparently filmed using hidden cameras, Simpson is interviewed by Gio Monaldo, a billionaire playboy from Italy played by Baron Cohen in full on prosthetics.

After insisting that he was working for a sheikh, Baron Cohen admits that he would be willing to pay millions of dollars if Simpsons confesses to the 1994 murder of his ex-wife, Nicole Brown Simpson as well as her partner Ronald Goldman.

Despite his best efforts, Monaldo ultimately fails to coax a confession from Simpson, who refuses to confess the crime. Baron Cohen’s character is also seen joking with Simpson about the prospect of murdering Monaldo’s Christina by pushing her out of a helicopter.

Simpson was acquitted over the killings of Brown Simpson and Goldman in a trial, but later faced liability in a civil court trial and was ordered to pay $33.5m to their families. Last October, the former NFL star was released on parole after spending nine years behind bars for taking part in an armed robbery at a Las Vegas hotel in 2007.