Home News Whale That Washed Up In Dublin Is Buried 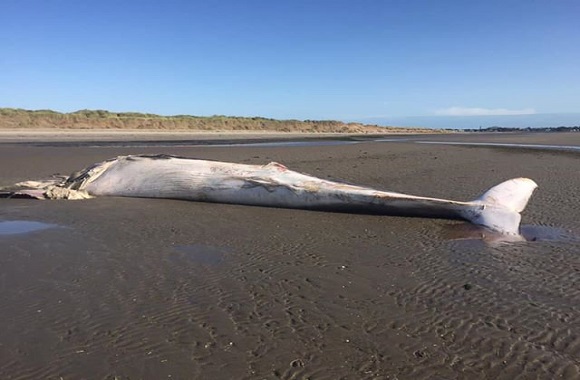 A whale that was spotted swimming in the Liffey last week has been buried.

The 25-foot long creature washed up on Dollymount Strand on Sunday after its remains were spotted in the water.

The Irish Whale and Dolphin Group has said that the fin whale has since been buried in the sand at the beach.

IWDG are requesting that relevant government agencies and departments join forces with NGOs such as the IWDG to develop a Large Whale Stranding Protocol.

IWDG are requesting that relevant government agencies and departments join forces with NGOs such as the IWDG to develop a Large Whale Stranding Protocol. Check out the article on our website for more information https://t.co/a1HVGF8WNN pic.twitter.com/Meom7cOqoz

The group has requested that the Government to helps develop a Large Whale Stranding Response Protocol. Dr Simon Berrow CEO of the IWDG said:

“Strandings, both live and dead, of large whales are not common in Ireland but do occur and we need a protocol, signed off by relevant partners, including government agencies, so we can respond quickly and efficiently in such cases without having to phone around looking for resources and support.”

Speaking to THe Independent, the secretary of the Irish Whale and Dophin Group (IWDG), Conal O’Flanagan said: “This is the proper way to deal with the remains.

“For one thing, it is very smelly. But it can also pose a risk to the public, who can pick up diseases. It’s not advisable to touch a dead whale.”