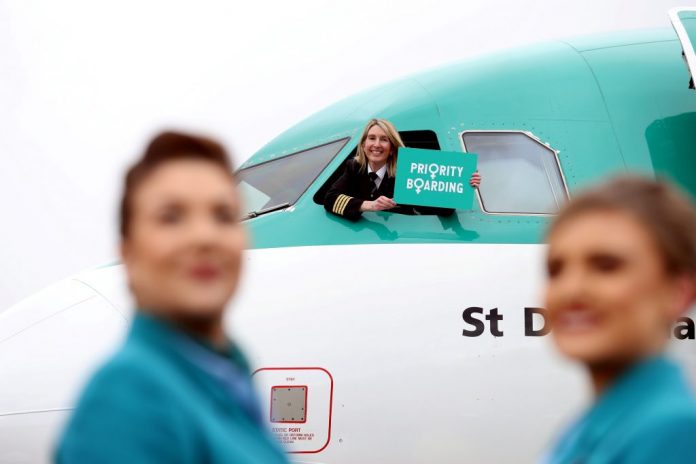 If you’re flying with Aer Lingus today and you’re a female you are going to love this news!

The airline has decided to get ‘on board’ with International Women’s Day, offering all woman travelling with them priority boarding for the day!

The offer will take place for all women departing on UK and European flights from Dublin, Cork, Shannon, Knock and Belfast, and will see 110 flights taking part.

And the best part? It also includes all junior companions too as the company celebrate and recognise the achievements of women and promote greater gender equality.

Aer Lingus state that they are focused on supporting female talent across the airline, creating a women’s network ‘LIFT’ (Let’s Inspire Female Talent) in an effort to recognise, enable and support the career progression of women in the company through ongoing workshops, panel discussions and mentoring programmes.

To highlight the important roles fulfilled by female members of the Aer Lingus team, a flight from Dublin to New York was managed by an all-female crew.

How? Because today 10% of Aer Lingus pilots are female, which is more than double the international airline industry average.

Marking International Women’s Day, Davina Pratt, Director of Operations commented: “As the Director of Operations of Ireland’s only 4 Star airline, and as a female Senior Manager I firmly believe in recognising and supporting female talent. At Aer Lingus we are proud to employ more than 2,000 females and I hope this figure will continue to rise as we see more women in visible leadership positions in Aer Lingus and beyond.”

Dublin Has A New Lotto Winner!!

Have You Seen Wild Wild Country Yet? Prepare Yourself…