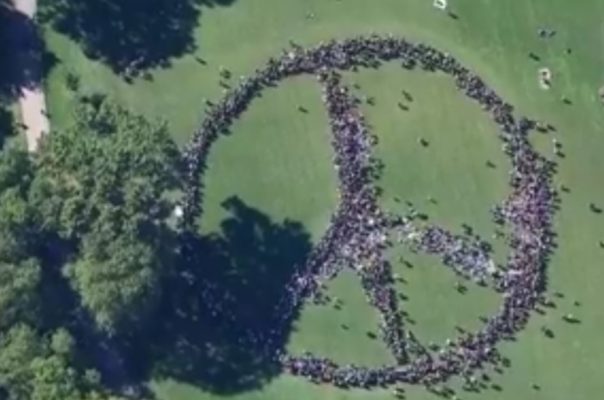 Yoko Ono attempted to achieve a world record for the most number of humans forming a peace sign in New York’s Central Park last Tuesday morning. However, it’s been reported that the effort has fallen flat. The event was organized to mark what would have been, her late husband and Beatles’ frontman John Lennon’s 75th birthday on October 9th.

According to the World Record Academy, the largest peace sign ever recorded was a total of 5,814 people. It was created in 2009 at a festival in Ithaca, New York. That was realised by high school student and peace activist Trevor Dougherty. The previous record was 2,500.

This means that the 2,000 or so who showed up at the East Meadow on Thursday, placed Yoko Ono’s effort at roughly third-highest. Ono asked requested that attendees offer their support to a partner in the effort. That was the John Lennon Educational Tour Bus, a mobile recording studio that helps students to create music and video projects.

Ono went to Reykjavik, Iceland, for the annual event at the Imagine Peace Tower. It’s a tower of light that “emanates wisdom, healing and joy,” and was opened by the singer in 2007. She goes there each year on Lennon’s birthday.

Artnet reports that her recent retrospective at New York’s Museum of Modern Art didn’t quite draw enough people to support her spectacle for peace. Even though there were performances by high profile musicians such as the Kinks’ Ray Davies.