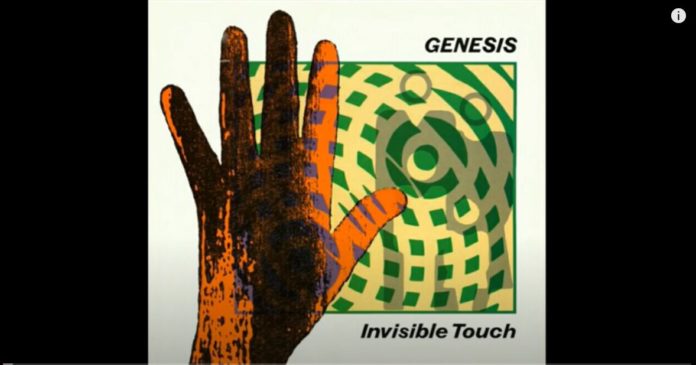 Genesis’ track “Invisble Touch” turns 35 years old this month! This song became the band’s sole No 1 on the Billboard Hot 100 in 1986. However, that was not the orginal plan.

During their school going years of the 60s, the founding members of the band saw themselves as songwriters. They were keen to put hits together for other singers. They did ultimately achieve their success, just not how they planned.

“We didn’t appear to be that good at (writing hits)”, their keyboardist Tony Banks said in a DVD interview for the reissue of “Invisble Touch”.

“And then I think we sort of shown the way by groups at the time like King Crimson and Family and Fairport Convention — another way of approaching music. That’s how we got into the progressive thing. We found we were able to do things in that area that no one else was doing, whereas in the pop area we weren’t so original”, continued Banks.

“By the time we got to (Invisible Touch), we felt we’d almost gone as far as we could in certain directions of … deep progressive music with extended solos and all the rest of it. The idea of trying to craft songs a little bit more was quite appealing”, he added.

“Invisible Touch” had originated from a democratic jam session. The band were working on “The Last Domino” section from their epic “Domino”. Mike Rutherford added a guitar riff to a Phil Collins drum machine pattern. Tony Banks maneuvered the chords on synthesizer.

Phil Collins once told Rollingstone that the track was inspired by a Shelia E song. “I think it was ‘Glamorous Life and I wanted to write my own version of that”, Collins said.

Phil Collins wrote in his 2016 memoir, Not Dead Yet that the song’s lyrics have more to them then meets the eye. On the face of it, the lyrics seem to illustrate a lover who “crawls under your skin”, a phrase from the song that Collins has changed during live performances.

“This is someone dangerous and destabilizing”, Collins wrote. “Someone who will come in and f*** up your life, man, which is the line I will end up singing onstage, much to the audience’s general whooped appreciation and my kids’ embarrassment”.

Calling the track his favorite Genesis song, Collins called it the album’s “flagship”. Collins’ successful run of solo LPs during the 1980s, could have prepared the public for the 1986 hit. However, Tony Banks said, “the songs were there anyhow”.

“Obviously Phil had become established more as a singles act, and that opened a few doors for us in terms of radio (being) prepared to listen to it, I suppose”, Banks said. “But ‘Invisible Touch’ and ‘Land of Confusion’, they’re hit songs, I think, by anybody”.

Here’s a reminder of the track below.

Legendary producer Bob Ezrin spoke about how he helped former Genesis singer Peter Gabriel with his solo career. More on that here.

Watch Ringo Starr And Other Drummers Perform “Come Together”