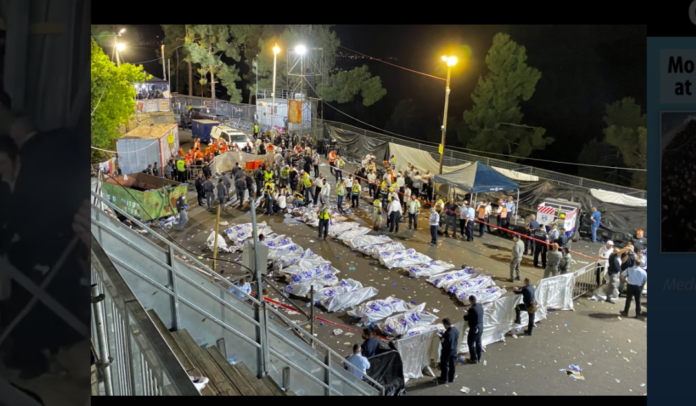 44 people have been killed and a further 150 were injured during a stampede which resulted in a horror crush after 100,000 stormed into a Jewish festival in Israel.

Unfortunately, some of those 44 people killed included children in an event that was described be Prime Minister Benjamin Netanyahu as a “heavy tragedy”.

Hats, shoes and baby strollers were also found on the ground in the walkway. Metal railings were also ripped from the ground. MDA spokeman Zhaki Heller said that this was caused by overcrowding. The event was to cater for 10,000, but 100,000 turned up.

Videos were also posted online, showing the horrific scenes as Ultra-Orthodox men were clambering through gaps in sheets of torn corrugated iron, as they tried to escape the crush. Police and paramedics were also trying to treat the injured.

Other videos have showed rescue workers trying to set up a field hospital. Dozens of ambulances could also been seen trying to make their way through the large crowds. 100,000 people were reportedly at the event, despite warnings from health officials to avoid large crowds as virus cases plummet in the country.

This was the largest festival to take place since the pandemic began, following a succesful vaccine programme.

The chaos began when spectators slipped on a narrow metal walkway as thousands tried to leave. This caused the crush as bodies began to pile on one another.

“people crushed on the ground”

“Our bodies were swept along by themselves. People were thrown up in the air, others were crushed on the ground”, one survivor David told Ynet. “There was a kid there who kept pinching my leg, fighting for his life. We waited to be rescued for 15 to 20 minutes in this crazy, terrible crush. it was awful”.

Another survivor speaking from his hospital bed said the ordeal felt like an “eternity”, adding that “the dead were all around us”.

Investigators have been sent to Meron to gather evidence.

“It was decided that the Police Internal Investigations Department will immediately examine whether there are suspicions of criminality by police in the tragedy in Meron”, said the Attorney General Avichai Mandelblit.

Around 5,000 police were sent to secure the event. Police also said that they arrested two people for obstructing them as they tried to keep order on the site.

This event is one of the biggest tragedies in Israel’s history. It matches the death toll seen from the Mount Carmel Forest fire in 2010.

“This is the worst disaster in Israeli history of a civilian event, this is shocking for the whole country”, Paramedic Dov Maisel said.