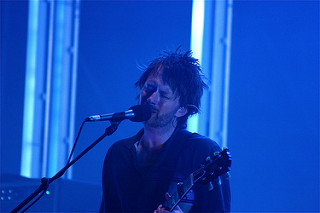 Italian director Luca Guadagnino (Call Me By Your Name, I Am Love) will take the helm of the project. He has collaborated several times with Tilda Swinton in the past and also appears to be a big fan of Yorke’s.

In a statement, Guadgnino said, “Thom’s art transcends the contemporary. To have the privilege of his music and sound for Suspiria is a dream come true. The depth of his creation and artistic vision is so unique that our Suspiria will sound groundbreaking and will deeply resonate with viewers.” (No pressure Thom.)

Guadnino added, “Our goal is to make a movie that will be a disturbing and transforming experience: for this ambition, we could not find a better partner than Thom.”

Although it’s the first feature film Yorke has scored, he has been involved in film soundtracks before. In 1998, he contributed to the film Velvet Goldmine and later in 2013’s he added his talents to The UK Gold, a documentary about tax avoidance.

And there’s no doubt that Yorke is an accomplished musician. Best known as the singer and principal songwriter of alternative rock band Radiohead he is a multi-instrumentalist. Yorke mainly plays guitar and piano, but he also plays keyboard, bass, and drums, and works extensively with synthesisers, sequencers and programming.

The movie has finished filming and is currently in post-production. No release date has yet been announced.