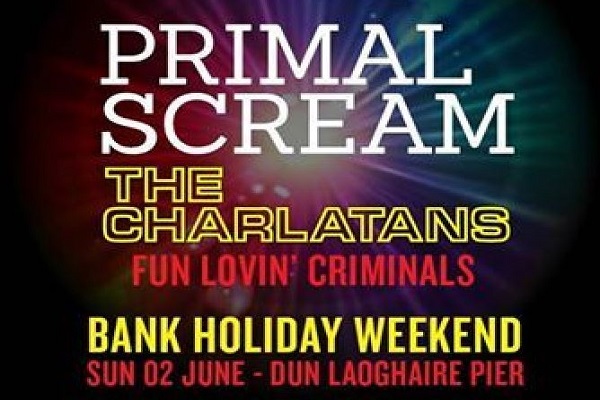 On Sunday 2 June 2019, Primal Scream, will be joined by special guests The Charlatans and Fun Lovin’ Criminals. That’s for a special concert as part of Bank Holiday Dun Laoghaire Pier festival.

Primal Scream releases a new, two-volume singles compilation this month ahead of the Dublin show – ‘Maximum Rock ’N’ Roll: The Singles’ featuring Rocks, Moving On Up, Come Together and Andrew Weatherall’s ‘Uptown’ mix, and Some Velvet Morning featuring Kate Moss.

The Scream have released a catalogue of influential, ground-breaking albums over the last three decades including (most notably) ‘Screamadelica’, XTRMNTR, ‘Vanishing Point’ and ‘Riot City Blues. We’ve compiled a list of The Scream’s ten best songs below.

And if that wasn’t enough of a musical treat, Multi-platinum New York City trio Fun Lovin’ Criminals celebrated the 20th anniversary of their debut album ‘Come Find Yourself’, which featured massive single Scooby Snacks, with sold-out tours in 2016 and in 2019 released “Another Mimosa”.

Primal Scream – 10 of their best songs:

4. Higher Than the Sun

Dun Laoghaire DART station is located across the road from the terminal building. The DART service can take you straight into Dublin City; or to Howth/Malahide or Bray/Greystones. Some mainline and suburban services stop at Dun Laoghaire also. See Irish Rail’s website for more information.

Taxis are available in the centre of Dun Laoghaire town, at the top of Marine Road (the road going uphill, opposite the terminal building) approximately 5 minutes walk from the ferry terminal.

Dylan’s Tangled Up In Blue Eyes

Watch The Who Perform With Eddie Vedder At Epic Wembley Show!