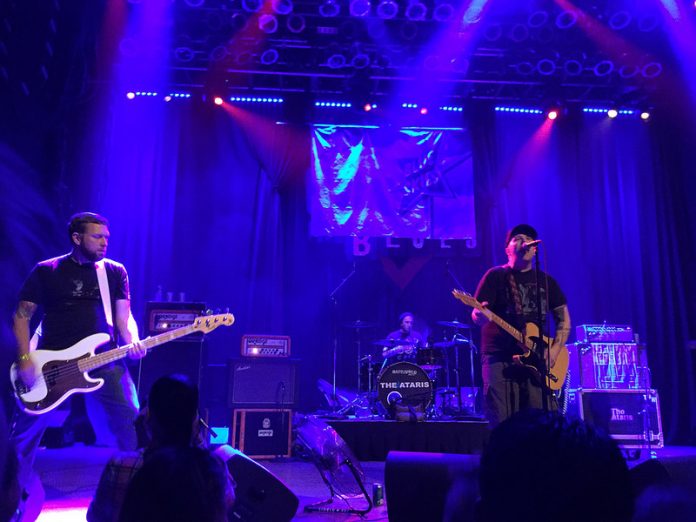 Former bassist of rock band, ‘The Ataris’ has been charged with fraud and conspiracy by federal investigators in the US. Mike Davenport was running a nationwide telemarketing real estate scam which made $27M over a seven year time frame.

Davenport played bass in The Ataris from 1998-2005 and then returned to perform with the band for their reunion shows between 2013 and 2014. He currently plays bass in band ‘Versus The World’.

The Santa Barbara Independent reported that Davenport could face 30 years in prison if convicted, along with Cynthia Rawlinson who was also indicted for the crimes. They are being charged with conspiracy to commit mail and wire fraud, one count of mail fraud and five counts of wire fraud.

Davenport’s offices were raided by FBI officers in October 2016 and Davenport was arrested last month, in possession of $104K cash. Another $850K was also seized from his bank accounts.

His indictment says that there were over a dozen names used for the telemarketing company, including ‘American Standard’.

Allegedly, the company posted ads for “pre-foreclosure” homes at below-market costs. When a caller rang the number to obtain information on the homes, they were charged $199 in a fee to access it. Then, there was either fake information sent out or none at all.

The ads claimed that “customers could purchase the houses by simply taking over the homeowners’ mortgage payments, and the deeds to these homes would then be transferred into the customers’ names”.

It seems that once it was discovered that these houses were not for sale, with some not even existing, victims’ requests for refunds were met with a 90-day waiting order from the company. According to the indictment, after that period of time had passed, the victims had to then mail a refund request with copies of letters written by the owners of the property that it was incorrectly listed. Most of the refunds were never issued as a result of the alleged scam.

The pair are due to appear in court today for arraignment.