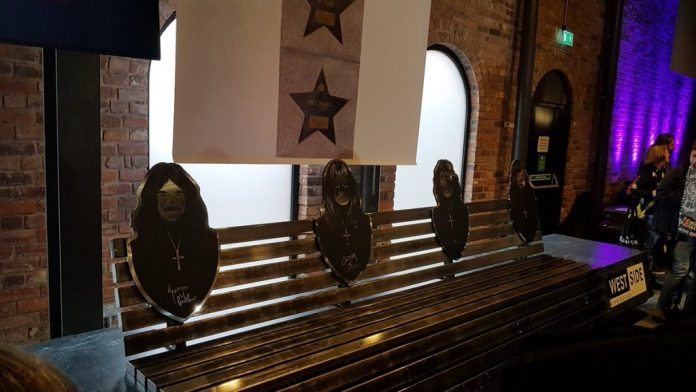 The sculpture is the brain child of a “super-fan” and architect Mohammed Osam. The bench incorporates the images of the band’s four original members and will be put on the renamed Black Sabbath Bridge over the canal on Broad Street.

Guitarist Tony Iommi said at the launch,  “I think it’s absolutely great. I was wondering what it was going to look like but it is really fantastic. I really love it.”

What a fantastic day today at the Black Sabbath Bench unveiling. It was so nice to see the wonderful turnout of fans from all over the world…Thank you all so much for coming and supporting this fabulous event…really great!!

The bench was forged in the city and is inscribed “Geezer. Ozzy. Tony. Bill. Made in Birmingham 1968′. Fans applied for 350 tickets to see the presentation.

Iommi said to thos in attendance,  “These are our fans and some of them have come from all over the world and it’s just brilliant to see that.”

Here at Gas Street Church in Birmingham for the launch of the ‘Black Sabbath bench’ and the addition of Bill Ward’s star to the Broad Street Walk of Stars pic.twitter.com/CpshNRCsdZ

Courtney Barnett Announces Show At The Olympia Theatre This November!

Alter Bridge Go To UK .. NOT Xing to Ireland!