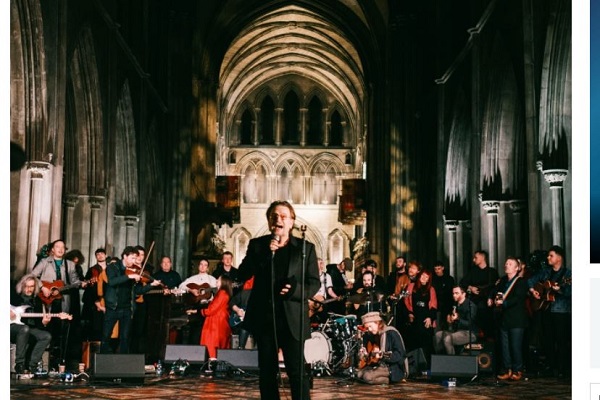 Bono performed U2’s classic hit ‘Running To Stand Still’ at Dublin’s Christmas charity concert on Friday night, a gig that the Irish rockstar has been attending for the last several years at the behest of event organizer and musician Glen Hansard. Previous performances from the U2 alum have included a 2020 rendition of “Christmas (Baby Please Come Home” by Darlene Love, as well as a duo of holiday classics in 2018 where the singer performed “O Holy Night” and “O Night Divine”. While fellow U2 member Edge joined Bono at both the 2018 and 2020 performances, he was absent at Friday night’s event, leaving Bono to perform the band’s track with a team of Irish musicians, including Hansard.

The charity concert, which has previously been held on Dublin’s famous Grafton Street, was moved to St. Patrick’s Cathedral for its 2021 rendition. The concert, which was live-streamed to at-home viewers due to ongoing Covid-19 restrictions, saw all proceeds go towards benefitting Simon Community, a charity dedicated to eradicating homelessness.