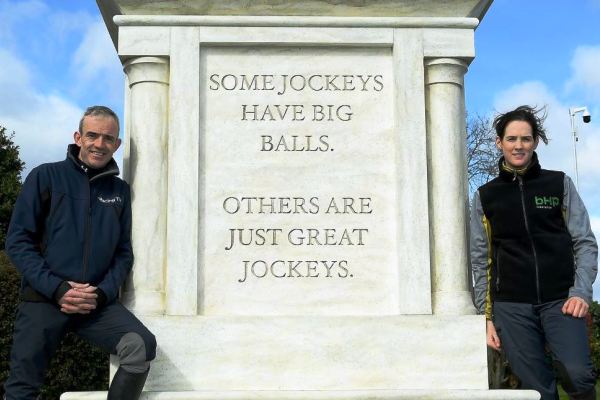 “SOME JOCKEYS HAVE BIG BALLS. OTHERS ARE JUST GREAT JOCKEYS”

The words as they are inscripted onto the plinth of a new statue set to highlight how women put their bodies on the line in top class racing as Cheltenham begins tomorrow.

They say its one of the only elite sporting events where men and women will compete as equals.

Based on a 3D body scan of leading rider Rachael Blackmore, the statue is an emblem for female jockeys in general.

The name itself is a hat tip to the iconic ‘Fearless Girl’ of New York.

The monument stands opposite the famous Centaur entrance to greet the hundreds and thousands of fans set to descend on Cheltenham this week.

A survey commissioned by Paddy Power found that 83%* of racing fans believe it doesn’t matter what gender a jockey is.

But it hasn’t always been that way. Fifty years ago, women were banned from riding in jump races.

However, 2019 could mark the year that Rachael Blackmore takes the title of racing’s first ever female professional jump jockey champion.

Speaking at today’s unveiling, where she was joined by several of her colleagues, Rachael Blackmore said: “To win the championship is every jockey’s dream. Being female no longer comes into it. The same goes for riding a winner here this week.

“When we walk out of the weighing room during the Cheltenham Festival, we all walk out shoulder to shoulder to compete as equals, regardless of which changing room we used.”

However, according to research carried out at Liverpool University, just over 11% of professional riding licences are held by women.

In addition, just one in 100 opportunities to ride in top-level races go to female riders – making Blackmore, and others who blazed a trail before her, exceptional in their achievements.

‘Fearless Jockey’ will form part of a wider campaign by Paddy Power to celebrate and encourage gender equality in racing, the sport of kings –and queens.