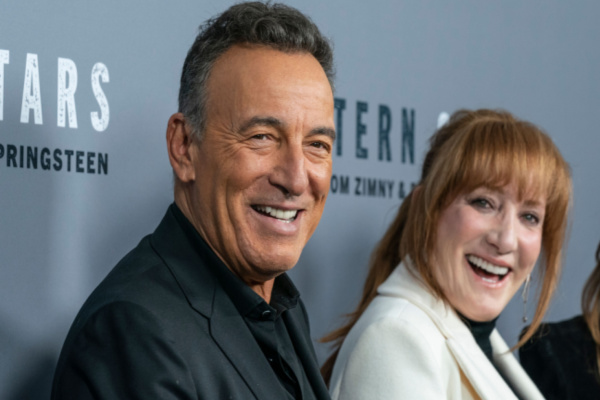 Congratulations are in order for Bruce Springsteen and his wife Patti Scialfa, who have become grandparents!

Sharing this news, Bruce Springsteen’s wife Patti added a series of photos including one of baby Lilly in hospital mitts and a matching beanie cap.

She also shared a photo of Sam Springsteen and partner pushing the baby in a pram.

“_walking the baby_. Lily Harper Springsteen”, Patti added alongside in a caption. See the post in full via Instagram here.

Sam Springsteen is a firefighter, who was sworn in  New Jersey two years ago. He graduated from Monmouth County Fire Academy in 2014.

Following this announcement, several household names from across the music world were quick to congratulate the Springsteen family on the new arrival.

“Congrats!!! She is beautiful !! Love the name .. we are quite fond of the “Harper” part since we have a Harper too”, she added, referring to their 13 year old daughter Harper.

On top of this announcment, Mr and Mrs Springsteen also celebrated their 31st wedding anniversary. More on this here.

The couple also have a 31 year old son Evan who works for SiriusXM Radio, while their show jumping daughter Jessica also won a Silver Medal at last year’s Olympics.

Back in May, Bruce Springsteen also announced a live tour with the E Street band in 2023.