Bruce Springsteen has made a number of surprise appearances over the last month or so. He visited a theatre in his hometown of New Jersey to introduce two screenings of his latest film Western Stars to the unsuspecting crowd.

In December, The Boss appeared at Asbury Park and surprised his fans with a two-hour benefit set. No stranger to the venue, he showed up this time for the Light of Day’s annual WinterFest week-long benefit concert to join the performance. 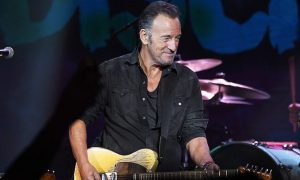 WinterFest event raises money to help fight Parkinson’s disease and is celebrating its 20th anniversary this year. Springsteen took the stage during Jesse Malin’s 7:50pm set to perform with the songwriter.

According to Spin, Malin told the crowd, “We’re going to bring out a guy, an older guy. He sings pretty good.”

At that point, Springsteen entered the stage to tumultuous applause, and the band broke into “Broken Radio,” which is the second single from Malin’s 2007 album Glitter in the Gutter and recorded a duet with Springsteen.

The Boss also played the guitar on “Meet Me at the End of the World” from Malin’s latest album Sunset Kids.

A highlight of the gig was Springsteen joining Willie Nile to perform the song “One Guitar” and Joe Grushecky and the Houserockers for their full ten-song set.

The band also played Springsteen favourites including “Atlantic City,” “The Promised Land,” and “Darkness on the Edge of Town.” The night closed with Springsteen’s “Light of Day,” which brought nearly all of the night’s performers together on stage to join in.

“It’s been an incredible experience,” Springsteen said. “Let’s do one more song!” He was joined by Grushecky’s keyboardist to perform one final rendition of “Thunder Road.”