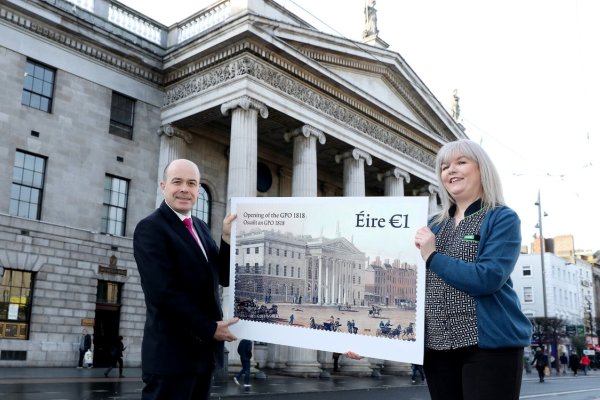 Celebrations are underway to mark 200 years since the General Post Office opened for business.

A new stamp has also been issued to mark the iconic building’s bicentenary which continues to operate in its original purpose, as the headquarters of the Irish Post Office.

The historical building began operations back in January 1818 while in charge at the time was the Post Office Secretary Edward Lees. The GPO is indelibly associated with the 1916 Rising, and the events that led to the creation of an independent Irish state.

Special day today on the 200th anniversary of the GPO. Myself and Debbie Gilligan, who has been working as a GPO clerk for 11 yrs, unveiled a special stamp to mark the occasion. Visit the GPO today or Saturday for live #Fishamble30 performances to mark #GPO200 pic.twitter.com/ymiGy3xULv

The GPO was the focal point of the Easter Sunday commemoration ceremony and parade on O’Connell Street in 2016 as the foundation stone was laid by Lord Whitworth on August 12th 1814 with £60 spent on entertainment for the occasion.

As the century progressed, the GPO presided over an organisation which became the centre of communications in Ireland and, for a few people, an unacceptable manifestation of British influence in the country. Its occupation on Easter Monday 1916, therefore, had both a practical and symbolic purpose.

Reconstruction and extension of the building after it was destroyed was undertaken by an OPW team led by TJ Byrne, who introduced the GPO Arcade, studios for Radio Éireann on the Henry Street wing and the Central Telegraph Office in the Prince’s Street block.

The enlarged Public Office, formally reopened by WT Cosgrave in 1929, retained elements of the original design while also introducing some art deco features.

Gardai Appeal For Witnesses After Fatal Car Crash In Meath