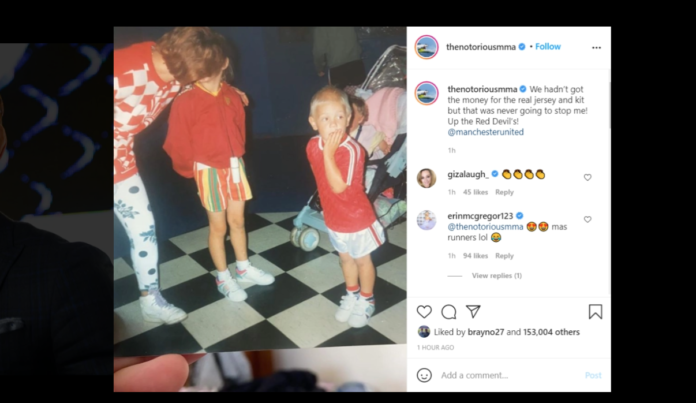 Via Instagram, he posted a throwback photograph of him wearing a knock off Man United kit from his childhood. (See Photo above).

“We hadn’t got the money for the real jersey and kit but that was never going to stop me! Up the Red Devil’s!”, the Notorious wrote.

The UFC fighter has reiterated his desire to buy the club. This comes after he was crowned the richest athlete by Forbes Magazine, ahead of former Man United star Cristiano Ronaldo and legendary Argentine Lionel Messi.

Writing on Instagram, McGregor was thrilled at this annoucement. He also celebrated by having the cover of Forbes Magazine put on a cake.

“Baby we did it!! Uimhir a Haon. Thank you Forbes for recognizing my role as an entrepreneur!”, he wrote.

He also added, “It was a dream to lead this list with so many successful athletes! Onwards and upwards we go”.

“I am open” – McGregor on possible purchase of Celtic shares

McGregor recently declared his interest in buying Man United. This comes after Ed Woodward stepped down as CEO of the club, as the fans continue to protest against the Glazer ownership.

On top of this, McGregor said that he recently held talks with Celtic about buying Dermot Desmond’s shares of the club.

McGregor revealed this during a Q&A with fans.

“A conversation came up regarding Celtic first to be honest. To acquire shares from Dermot Desmond”, McGregor said. “I am certainly interested in acquiring a sports team at some stage! Both Celtic and Man United are teams I like for sure”.

“But I am open. I feel I could do big things for a club”.

Conor McGregor also recently bought the Marble Arch pub in Drimnagh. This pub was where the Dubliner was arrested and received a fine for assaulting a member of the public.

This is the second pub bought by the UFC star, after buying the Black Forge in Crumlin last year. More on that here.