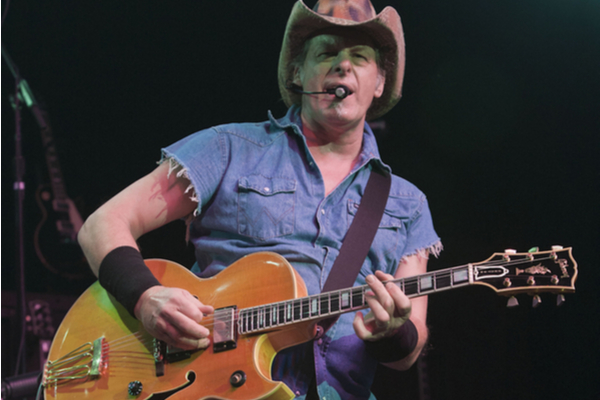 Controversial rocker Ted Nugent has been known for espousing a conspiracy theory or two over the years.

For example, Nugent has gone on record claiming that Covid-19 “is not a real pandemic”, branding it a “hoax”.

“The lies I’ve seen that I’ve been doing these public appearances knowing I had the COVID-19. False”, he insisted.

He had also revealed that he was even diagnosed with the virus, saying that he had been struggling to get out of bed.

“Could I become any cooler” – Nugent

In a new interview, Ted Nugent was asked if he feels that he has become a lightening rod for controversy over the years.

Here’s what he said. Hold on to your hats!

“It’s all so simple, it’s stupid. Courtney Love is a drug-abusing liar; guns and the Second Amendment are perfect; drugs are for weak losers; politics are supposed to be driven purely by the U.S. Constitution; gay people are just people; the very concept of animal rights is a dirty scam; too many Islamists are murderous, homophobic devils”.

He then claimed that, COVID-19 will “go down in history as the biggest scam known to man”.

Nugent also added, “Kyle Rittenhouse [a then-17-year-old from Antioch, Illinois who fatally shot two men and wounded another in Kenosha, Wisconsin in August 2020] displayed the perfection of good over evil; [former U.S. president Barack] Obama was an America-hating p****, nearly everything [former U.S. president Donald] Trump did benefited America and mankind; and [current U.S. president] Joe Biden is the manifestation of cultural deprivation. I’m a lightning rod because truth, logic and common sense is kryptonite to the politically correct, braindead, soulless cult-of-denial fleebs. Could I be any cooler?”.

Nugent also had his say on the Neil Young Spotify saga earlier this year. He did not mince his words there. Find out what he said here.