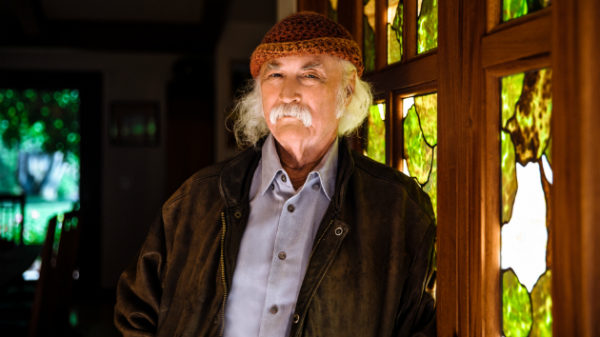 Less than a month before his 80th birthday, David Crosby’s solo album “For Free” is being released on July 23.

This album will see Crosby collaborating with artists like Sarah Jarosz and Donald Fegan from Steely Dan and Michael McDonald. The LP was produced by Crosby’s son James Raymond and will also feature drummer Steve DiStanislao and saxophonist Steve Tavaglione.

This album follows the former CSN band member and founder’s 2018 record “Here If You Listen”. It is also his fifth solo record since 2014, having released just three solo albums in his entire career. Like most musicians, he has been largely inactive since the pandemic started.

He also recently sold his publishing to Irving, Azoff’s Iconic Artists Group to make up for income lost.

“To connect with your son”

In a statement, Crosby said he was overjoyed to work with his “incredibly talented” son James.

“Can you imagine what it’s like to connect with your son and find out that he’s incredibly talented—a great composer, a great poet, and a really fine songwriter and musician all around?”, Crosby said.

“We’re such good friends and we work so well together, and we’ll each go to any length to create the highest-quality songs we can”.

The album will also feature Joni Mitchell’s track “For Free” which is where Crosby’s album got its name. Crosby teams up with Sarah Jarosz for this track.

“Joni’s the greatest living singer-songwriter, and ‘For Free’ is one of her simplest”, Crosby said.  “(‘For Free’ is) one of my favorite songs because I love what it says about the spirit of music and what compels you to play”.

The cover art for this album was painted by Joan Baez. Check that art out and how you can also pre order the album here.

The album’s opening track is called “River Rise” and was written by Michael McDonald and James Raymond. You can also check out that track below.

“River Rise came from wanting to write something very evocative in California, but almost with a country-song perspective”, Raymond outlined. “Something that speaks to the empowerment of the everyman or everywoman”.

Another track includes “Rodriguez Tonight” written for the album by Donald Fegan.