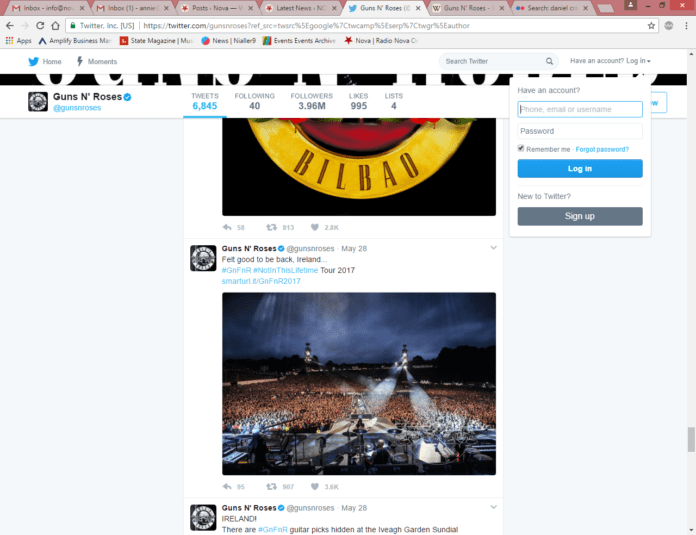 If you went to either of Slash’s rocking sold-out shows at Dublin’s Olympia Theatre this week, then your ears are probably still ringing.

And if seeing Slash, Myles Kennedy and The Conspirators performing Guns N’ Roses’ classics like Sweet Child O’ Mine and Paradise City rang a few bells for you of the original line-up, then I’m here to tell you they ain’t never gonna get back together.

It’s no secret Axl Rose and Slash are not the best of mates, although Slash told Radio Nova when he was in town that he “hasn’t got time for tensions”…that may be so, but his friends do!

Charlie Sheen introduced Slash on stage at The Olympia, referring to him as the “greatest guitarist in the history of sound” – this was a year after speaking at Slash’s Hollywood Walk of Fame induction ceremony saying “It’s quite fitting that Slash is getting a star on the very street Axl Rose will one day be sleeping on.”

Them’s fighting words, but Axl doesn’t seem that bothered. The current Guns N’ Roses is kicking off an Australian tour in Perth tomorrow and the famously-tardy front man told the media Down Under that he’s not a believer of bands reuniting.

Axl said “For me there hasn’t been a way to make any type of reunion work…It’s not somewhere I’d go back to or would want to go again. Life’s too short.” So we won’t expect a Guns N’ Roses reunion then, nor any new material from the band’s current line-up, if guitarist Ron ‘Bumblefoot’ Thal is to be believed.

He told fans online this week to “just forget about a new record until it happens. I mean, I can’t even begin . . . How long have we been talking about a new f***ing record?”, adding in a slightly calmer tone: “we haven’t been in the studio together; we haven’t started writing together as a band”.

So while there’s no love between Slash and Axl, with the ex-GnR guitarist producing stomping new albums and shows, it doesn’t seem like there’s any competition either.

On This Day In Music: Elbow’s Guy Garvey Was Born