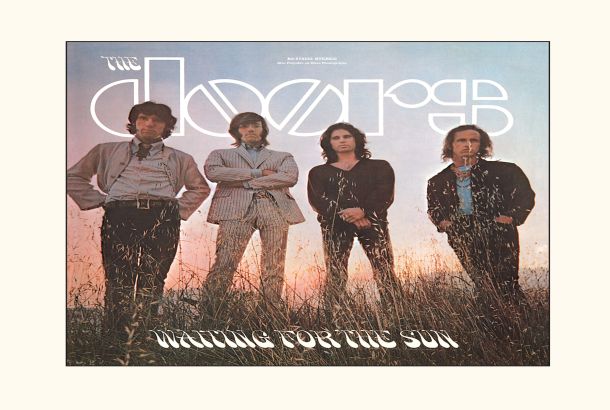 The Doors’ third record, 1968’s Waiting for the Sun is set to get a deluxe reissue for its 50th anniversary this year. Details and the full track listing is available below.

The ’50th Anniversary Deluxe Edition’ of the album, is due out on Sept 14th, and includes newly remastered audio, a disc of previously unreleased rough cuts of tracks from the sessions and five live songs from the Doors’ performance in Copenhagen way back in September 1968.

The band are also going to release a 7″ single to commemorate ‘Hello, I Love You’ reaching No. 1 on Aug. 3, 1968. That 45 featuring the single’s original B-side ‘Love Street’. It will be released on the song’s No. 1 50th anniversary of Aug. 3rd. Waiting for the Sun was released in July 1968 and became the Doors’ only No. 1 album. In addition to ‘Hello, I Love You,’ the record comprises of classics like ‘Spanish Caravan’, ‘The Unknown Soldier’, and ‘Five to One.’

The two-CD/one-LP collection also features the record’s original stereo mix freshly re-mastered from the original master tapes by Bruce Botnick, the band’s longstanding engineer. The 14 tracks on the second disc host a rake of early mixes of many of Waiting for the Sun‘s songs plus five recordings from the Doors’ Copenhagen concert, including  ‘Back Door Man’ and  ‘The WASP (Texas Radio and the Big Beat).’

Speaking in a press release announcing the ’50th Anniversary Deluxe Edition,’ Botnick said, ‘I prefer some of these rough mixes to the finals,” “as they represent all of the elements and additional background vocals, different sensibilities on balances and some intangible roughness, all of which are quite attractive and refreshing.’