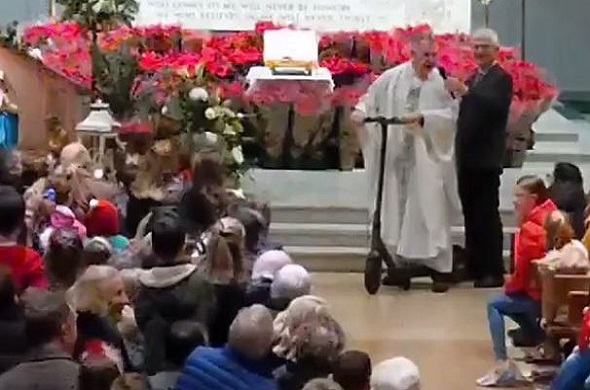 A Dublin priest gave his congregation a mass they will never forget on Christmas Eve this year.

On Tuesday evening, Father Peter O’Connor gave the parish an unforgettable ceremony by leaving the church on a scooter!

Father O’Connor said he wanted to try out the gift that Santa Claus left for him a day before.

He then sped off on his scooter to a raucous reception, with the kids particularly enjoying the show.

Check out Doug Leddin’s excellent footage which has been shared thousands of times on social media.

My priest is gas! #ChristmasEve pic.twitter.com/q3Yeg2EvvY

Mr Leddin said the ceremony took place in “Ballyroan! Was mayhem! Great Craic… was like the Ryan Tubridy Show of masses.”

Village Of 400 All Agog As Banner Goes Batty Over Lotto...

A tribute to Mono