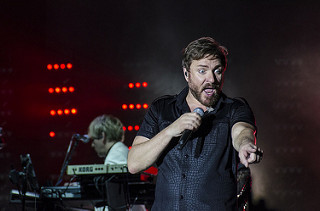 The wait is over, this year’s EP line up has finally been announced!

The 14th edition of the three day festival will be headlined by Mercury prize winning The xx, alternative hip-hop pioneers, A Tribe Called Quest and 80’s new wave legends,Duran Duran.

However, the announcement comes hours after tickets sell out! The tickets which went on sale this morning at 9am, flew out the door and sold out in minutes.

Electric Picnic announced the news that the all tickets were sold out by 10.00 am this morning. In its 13-year history Electric Picnic has never sold out ahead of the line-up release and so far in advance of the festival weekend.

Those of you lucky enough to have snapped up tickets this morning have a stellar weekend ahead of you this Sept 1st – 3rd .

Across the weekend Interpol, Phoenix, Run The Jewels, London Grammar, Rag ‘n’ Bone Man, Madness, Father John Misty and The Divine Comedy are also set to take to the stage.

Electric Picnic began as a one-day event in 2004, before growing to a weekend-long festival within a year. Over the years its grown and incorporated attractions such as the 24-hour cinema tent, the Body and Soul arena (offering an ambient lounge with beanbags, massages and tarot card readings) and the Comedy Tent (curated by Gerry Mallon) and a silent disco.

Last year saw the introduction of the swimming area, set in the idyllic surroundings of the Stradbally Hall estate. It also hosted huge brands such as Bacardi, Three, Orchard Thieves, Heineken and Electric Ireland, who each had their own areas dotted around the grounds.

There will be a warm welcome for the festival again in Laois as it was revealed last week that it is worth €8m a year to the county, with half of that spent in Stradbally village alone.