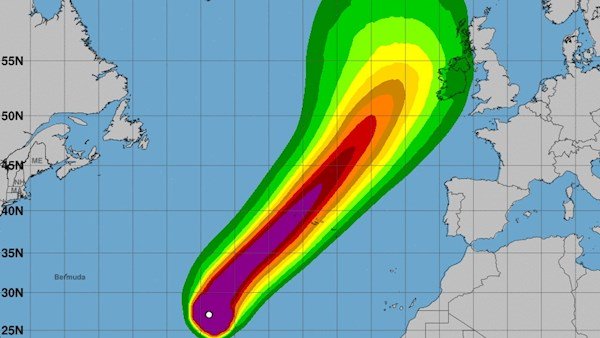 Emergency planners are on storm alert as Hurricane Lorenzo makes its way towards Ireland.

According Met Eireann it still remains unclear, but it now looks like the storm will track close to the country.

In a statement from the forecasters, they said the weather system is “heading towards the Azores and that looks fairly certain. It will continue on its north-eastward track.”

“It till begin to weaken a good bit at that stage and by the time it reaches close to Ireland or over Ireland, it will certainly no longer be a hurricane, it will be an extra-Tropical structure.”

“The exact track is still uncertain, but there is increasing confidence that it will track either close to Ireland past just to the north-west or even come down across parts of Connacht initially and come down across the country later Thursday.”

According to reports, no recorded category five hurricane has ever made it so far north or east in the Atlantic. Officials at the Department of Housing are monitoring the latest forecasts this morning for information on Hurricane Lorenzo

They have already contacted the ESB, Gardaí, public transport operators and local authorities.

They have been ordered to monitor Met Éireann’s updates over the coming days and be ready to activate their crisis management plans.