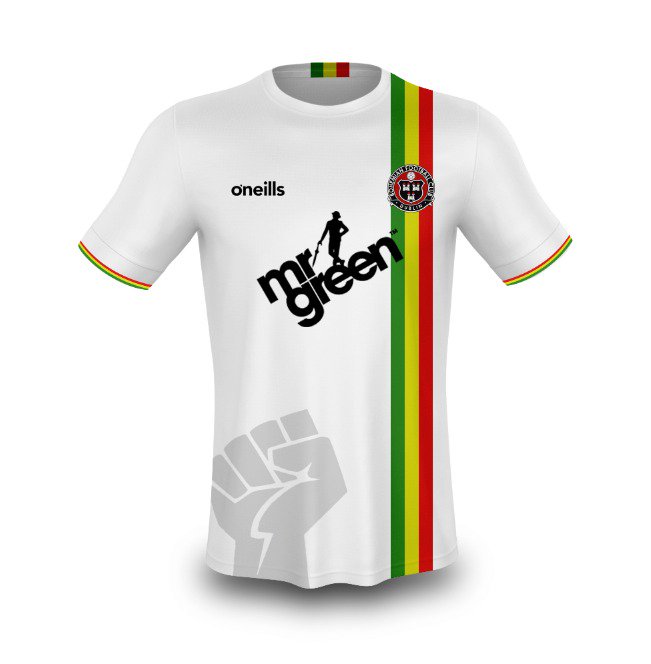 Bohemian football club has been forced to redesign what was looking like a cult-classic iconic shirt after it was made aware that it couldn’t be issued the license for the use an image of the famous reggae icon Bob Marley as part of its innovative 2019 away shirt.

Bohs were informed by the Bob Marley representative agency that the unnamed company did not have the right to grant a licence for this image.

It was designed as a tribute to Marley, who performed at the club’s home stadium, Dalymount Park, in 1980.

The famed Gypsies say that they ”regret that we cannot offer the original jersey as designed but believe that the new design, while maintaining the colour scheme for a nod to Dalymount’s musical history, also brings with it a powerful message.”

The new shirt features a ”clenched, raised fist, as a symbol of solidarity and support used to express unity, strength and resistance.”

They have decided to give 10% of profits to a fund, which will continue the already fan-led and previously fan-funded initiative of bringing people living in Direct Provision to games at Dalymount Park.’

“MASI warmly welcomes this initiative by the Bohemian Football Club. Bohemians have been assisting MASI and bringing people in Direct Provision to games for several years and are very proactive on numerous other social issues too.

“We hope the jersey is a huge success and allows for many more trips to Dalymount Park in 2019 for those affected by Direct Provision.”

Bohemian Football Club, is a wholly fan-owned club since 1890, in contrast to many other clubs who are privately owned and operated.

Bohemians thanked the thousands of people who made contact with the club since the pre-order release, from over 45 countries in five continents. We were astonished at the truly global reaction we received.