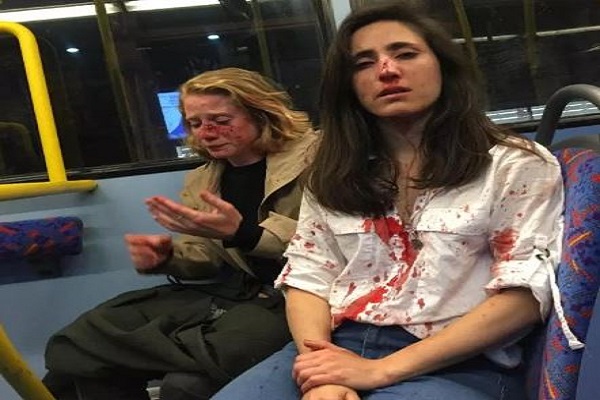 A fifth teenager has been arrested after a couple were subjected to a homophobic attack and robbery by a gang when they refused to kiss on a bus.

The assault on Melania Geymonat, 28, and her girlfriend Chris happened on the top of a double-decker London night bus as they were travelling from West Hampstead to Camden Town, north London.

Melania Geymonat released the image of her and her girlfriend after what she claimed was an attack on them both by a group of young men. Pic: Melania Geymonat

A 16-year-old boy was arrested on suspicion of robbery and aggravated burglary on Saturday morning, Scotland Yard said.

The arrest came after four males aged between 15 and 18 were arrested on suspicion of robbery and aggravated GBH on Friday. All are being questioned in custody.

A group of young men allegedly began harassing the two women when they discovered they were a couple, asking them to kiss while making sexual gestures. Both women were taken to hospital for treatment to facial injuries after the incident in the early hours of May 30.

Miss Geymonat said in a Facebook post that the gang behaved like “hooligans”, throwing money at the couple before punching them in an attack which left them covered in blood.

Speaking to BBC Radio 4’s World At One she had never been attacked because of her sexuality, and was surprised it had happened in London.

Miss Geymonat said, “I know that there is a lot of violence, horrible violence, all the time. That’s the thing that made me tell the story.”

“Even when these guys came, it was not the first situation when men see two women kissing, and they start acting as if we were a joke.”

Police continue to appeal for witnesses and information after the alleged assault and robbery, which happened on the N31 bus, and continue to trace other suspects. The Met police said that a phone and bag were robbed.

Fifth arrest made following homophobic attack on a bus in Camden https://t.co/NIWQLJZGoA pic.twitter.com/swGHcLtRMa