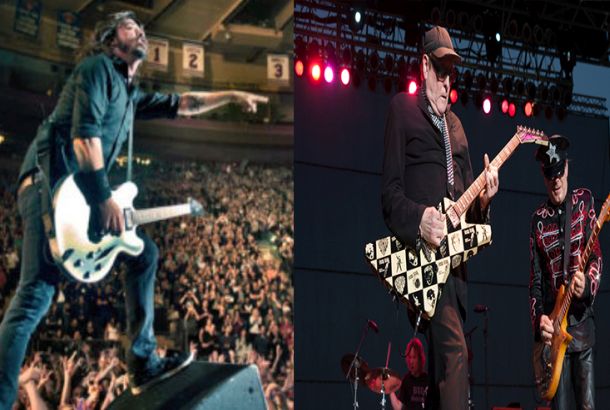 As mentioned on Seriously Addictive Music News, Foo Fighters Jammed With Cheap Trick Legend Rick Nielsen On Stage! Dave Grohl and Co were joined onstage by Cheap Trick legend, guitarist Rick Nielsen for a cover of the 1955 Fats Domino classic, ‘Ain’t That A Shame’. The video was shot during their recent show at Chicago’s Wrigley Field and is available below.

The classic track had been has been a long time favourite of Cheap Tricks. This version saw Dave Grohl move to the drum kit while Foos drummer Taylor Hawkins handled lead vocals and  Cheap Trick “one of the greatest bands that ever walked the planet Earth.”

Nielson was the latest in a series of guests on the Foos worldwide tour in support of their ninth album, Concrete And Gold. Over the summer months the group teamed up with Axl Rose, Slash and Duff McKagan for a performance of the 1987 Guns N’ Roses classic, ‘It’s So Easy”, at the Firenze Rocks Festival in Florence, Italy on June 14.

Red Hot Chili Peppers skinner Chad Smith also lent his drumming skills for The Faces’ 1971 classic, “Stay With Me”, during a show on July 14th at The Jones Beach Theater in Wantagh, NY; and Eagles guitarist Joe Walsh  rocked his 1973 classic, “Rocky Mountain Way”, during the Foos July 22nd in Boston, MA.