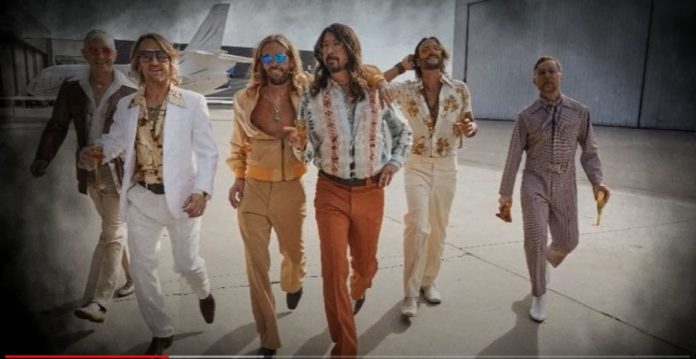 Foo Fighters have confirmed that they will release a new album under their alter-ego The Dee Gees.

The band will release this disco inspired album called “Hail Satin”. The album will be released next month to coincide with the second Record Store Day drop on July 17.

The album was recorded at the band’s “Studio 606” and is also marked as a debut Dee Gees album. Foo Fighters had already released their latest album “Medicine At Midnight” earlier this year.

Back in February, Foo Fighters had released a cover of The Bee Gees’ classic “You Should Be Dancing”.

Speaking to Jo Whiley back in February, Dave Grohl said, “We’ve been going down to our studio every day and filming things and recording things, and this one day we had our list of things we were supposed to do and it said, ​’Record a cover song for Jo”.

And while we were having this conversation somebody said, ​‘Hey, have you seen that Bee Gees documentary?’ And I was like the last person on earth, the only person that hadn’t seen it! So I was like, ​‘Why don’t we just do a Bee Gees song?’ And someone was just like, ​‘OK… how do you wanna do it?!’ And I said: ​‘Well, let’s do it like the Bee Gees”, he also added.

Check out that cover and Nova’s report on that story here.

Earlier this month, Foo Fighters were also confirmed as the first band to play at Madison Square Garden since the pandemic started.

A more recent gig from the band in California also attracted protests from anti-vaxxers. More on that here.