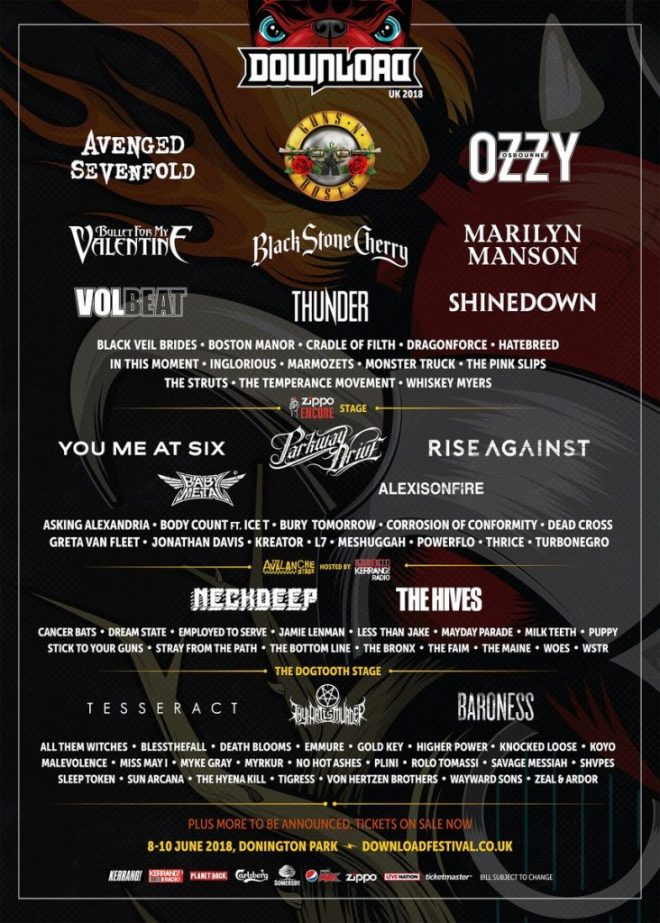 In the UK, the weekend of June 8th – 10th, will see the grounds of Donington Park shake as this year’s rock and metal festival will be an unforgettable one. Avenged Sevenfold, Guns N’ Roses and Ozzy Osbourne are all confirmed to headline this year’s Download Festival.

Friday will see Avenged Sevenfold take to the stage; even though the band aren’t releasing anything new this year, they’ll still continue to tour off their cortically acclaimed album ‘The Stage’. According to lead singer, M. Shaddows they are festival fit and their progressive rock sound will make for an astounding live set.

On Saturday it’s the turn of Guns N’ Roses with their first UK festival performance since their reunion will be one to watch. This could even be their last round of shows before they call it a day.  The band are set to perform a number of festival dates across Europe this summer including the festival.

Sunday, Ozzy Osbourne, The Darklord and master of heavy metal is the ideal rocker to close out the festival. It’s been nearly 50 years since Black Sabbath released their first album. Both solos and with the Sabbath Ozzy has been producing amazing records since.

Marilyn Manson and Bullet For My Valentine are also supporting as well as an appearance due from Ice-T’s rap metal band Body Count! Here’s the full line up across the entire weekend: