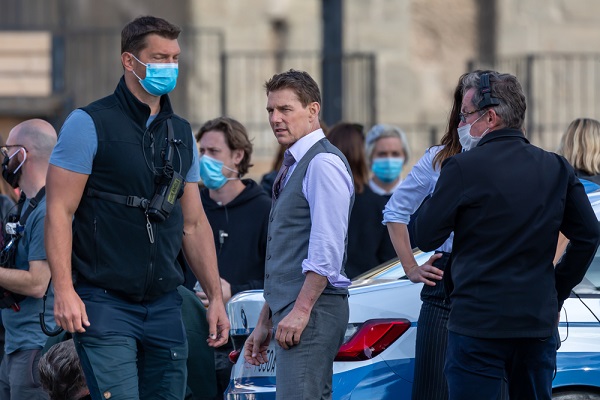 A furious Tom Cruise must isolate for 2 weeks after 14 crew members from Mission Impossible tested positive for Covid-19.

The actor spent a day filming with dancers who tested positive for the virus. Shooting for the film has since been halted as the whole crew must now isolate for 14 days, including Cruise.

Four dancers were said to have danced “within a couple of metres” of Cruise, as they shot a nightclub scene. This has become the latest in a string of delays for the film.

Ten crew members have subsequently tested positive for the virus. Cruise has been isolating since Tuesday.

A source has also said that Tom Cruise is understood to be “fuming”, following his rants at crew members last year over breaches of Covid protocols.

“Tom is absolutely fuming about what’s happened, especially given his rant to his staff last year”, the source said.

“It’s going to badly affect filming and they’ll be playing catch-up when they finally come back”.

“Fourteen crew members have got Covid — most of them are close aides of Tom’s. The whole shooting crew, about 60 people, have all had to self-isolate for 14 days”.

“If I see you doing it again, you’re f**king gone”, Cruise reportedly said in a video which leaked online. “And you, don’t you ever f**king do it again. We are not shutting this f**king movie down”.

It was reported that Cruise saw two crew members standing less than one metre away from each other. Five crew members were said to have walked off set as “tensions” began to build. More on that here.

More recently, Cruise also got into a strop over some low hanging branches while they were shooting the film in Yorkshire last month.

A source said that Cruise had to compose himself between scenes whilst adapting to the shrubbery.

“The branches hanging over were knocking on the roof of the trailer which Tom and some of the other cast had been using”, the source added.

Other things were getting on Cruise’s nerves too.

“But along with the trees, the sets in Yorkshire started to get a bit busy — with fans flocking to try to get a glimpse of Tom and co-star Hayley Atwell”, the source continued.

“At one point two nearby paramedics stopped to get a photograph and were hauled over hot coals by security. They were made to delete their snaps before being sent on their way”.