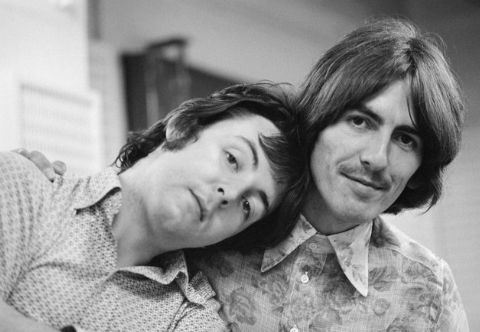 Former member of the Beatles, George Harrison , would have turned 75 today. The guitarist died at the age of 58 in 2001, after a battle with lung cancer, which spread to his brain. He had previously also battled throat cancer and a brain tumour.

Bandmate Sir Paul McCartney posted on Twitter, wishing Harrison a Happy Birthday. He shared a black and white photo of the pair together, with the caption: ‘Happy Birthday Georgie. Wonderful memories.’

A series of photos of the musician were also shared on the official Twitter of The Beatles, along with a happy birthday message.

A message from George’s widow Olivia Harrison and only son Dhani was shared on the account reading: ‘Olivia & Dhani invite you to join them in celebrating what would have been George’s 75th Birthday today, by watching this performance of one of his loveliest songs, Isn’t It A Pity, here performed by his friends at the #ConcertforGeorge.’

Another tweet from the account also shared a video of ‘Blue Jay Way,’ a 1967 Beatles song which was written by Harrison.

Brian May Says He Was ‘Very Near Death’ After A Heart...