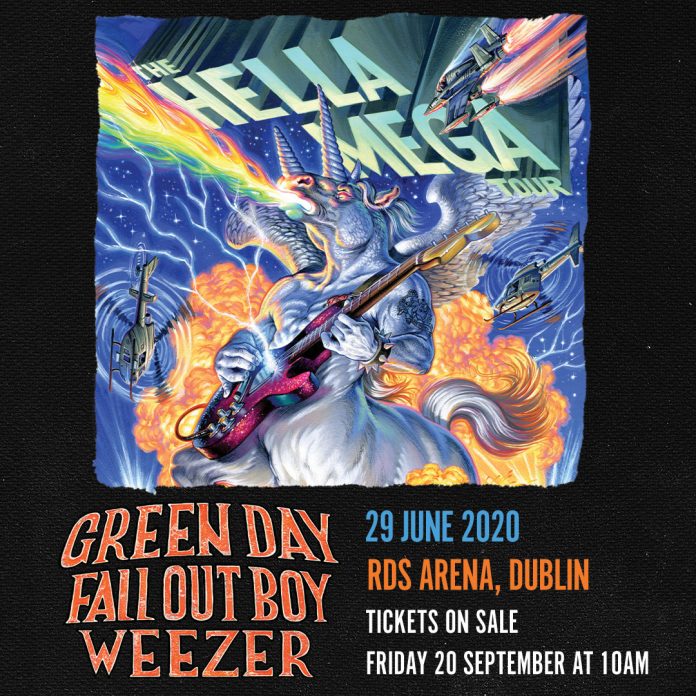 Three of the biggest acts in rock music have announced they will be heading out on the road together for the first time ever on THE HELLA MEGA TOUR presented by Harley-Davidson… and they are coming to Dublin!

Green Day, Fall Out Boy and Weezer made the announcement with all three bands performing a historic show tonight at the legendary Whisky A Go Go in Los Angeles.

The global tour kicks off June 13, 2020 in Paris and will visit cities across Europe and the UK throughout the month including Glasgow, London, and Dublin on 29th June 2020.

Along with great tunes, concert-goers will also see and experience the newest Harley-Davidson motorcycles, including the fully electric LiveWire and their new, exciting lineup of electric bicycles.

The Los Angeles-based ska punk band the Interrupters are also on the tour and will play first every night. They will be followed by Weezer, Fall Out Boy and then Green Day to close out the show.

Green Day‘s Bill Joe Armstrong told Rolling Stone Magazine the Hella Mega tour was a Green Day idea.”We talked about how we weren’t really wanting to do stadiums and do something that was like throwback to the Monsters of Rock Tour,” he said, referencing a series of metal tours in the 1980s and early 1990s featuring Van Halen, Metallica, Faith No More, Dio and Aerosmith. “There was, of course, Fall Out Boy and Weezer and now we’re stoked.”

Tickets for the RDS Arena, Dublin on 29th June 2020 from €79.50 (including booking fee) go on sale Friday, 20 September at 10am from Ticketmaster. Subject to licence.

Fall Out Boy’s Pete Wentz told NME: “To me, I remember, in the 90s, there was this one summer, and Guns and Roses, Metallica went on the stadium tour and my parents didn’t let me go to it. You want to recreate that memory. Hopefully if somebody who gets to go to the tour, I think this tour represents counter-programming, I think that the world is moving in one direction in an obvious way, or whatever. I think that this tour represents  counter programming to that and it’s awesome to take part in that and be a small part of it.”

In celebration of this announcement, all three artists are also thrilled to announce new singles which will be a first taste of their respective forthcoming albums. All three singles are available now and the respective albums are available for pre-order.

Five-time Grammy Award-winning Rock and Roll Hall of Fame inductees Green Day have unleashed their brand new single “Father Of All…,” which is the lead track on their forthcoming thirteenth studio album of the same name, out February 7, 2020 on Reprise / Warner Records.

Pre-order the album Father Of All… here.

Listen to their single “Father of All…” here.

Multi-platinum selling, Grammy-nominated Fall Out Boy’s new single “Dear Future Self (Hands Up)” ft. Wyclef Jean will be featured on their forthcoming record Greatest Hits: Believers Never Die – Volume Two, out November 15 via Island Records. The song marks the band’s first new music since the August 2018 release of the three-song Lake Effect Kid EP, a love letter to their hometown city of Chicago that featured the full version of the band’s previously unreleased title track demo along with two new songs “City in A Garden” and “Super Fade.”

Listen to their single “Dear Future Self (Hands Up)” here.

Multi-platinum, GRAMMY award-winning Weezer’s new single “The End of the Game,” produced by Suzy Shinn, will be included on their forthcoming 14th studio album, entitled Van Weezer, due out in May 2020.  The inspiration for this album derives from the deepest roots of Weezer – metal!

Listen to their single “The End of the Game” here.