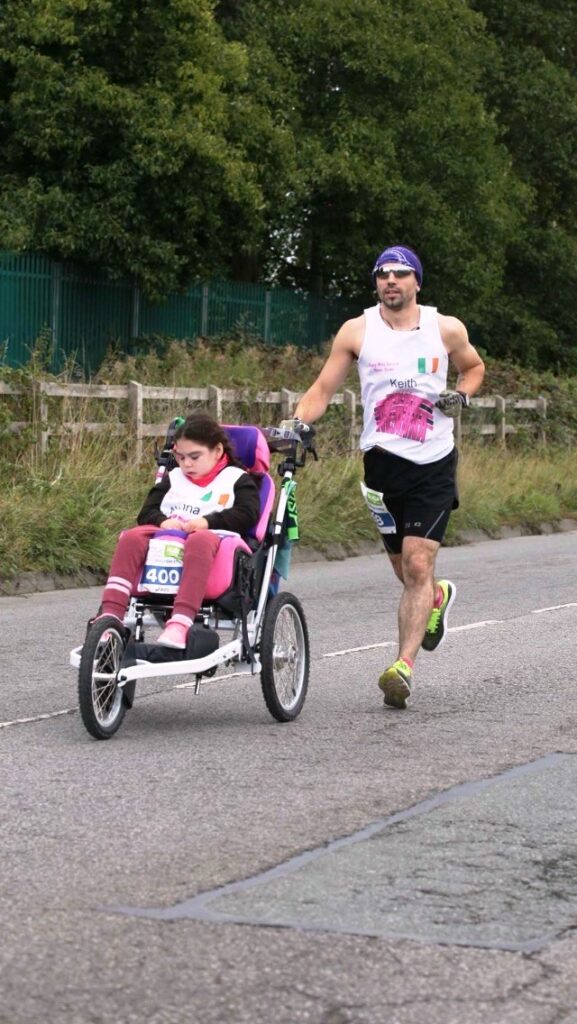 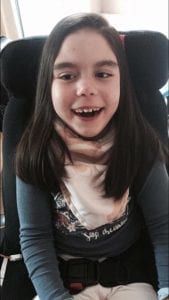 An awe-inspiring young father dad is preparing to go to immense lengths to raise €60,000 for a children’s disability service by pushing his daughter in a special running chair in Sunday’s Dublin City marathon.

34-year old Keith Russell from Navan, Co Meath, will push his seven-year-old daughter Alanna for the duration of the 26-mile marathon course in her wheelchair. Alanna, who has spastic quadriplegic cerebral palsy, does not have the use of her arms or legs and cannot talk.

She was born prematurely at 31 weeks by emergency cesarean section after her twin Isabelle passed away. Keith is determined that Alanna will become the youngest participant in this year’s Dublin Marathon, which takes place this Sunday. 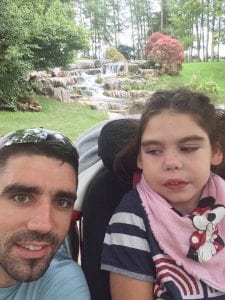 By running the marathon, Keith hopes to raise much needed funds for The Meadows Children’s Respite Centre in Navan for children with a range of disabilities and provides much needed respite to their families.

The life changing service has a team of 12 dedicated staff and supports more than eighty children with disabilities and their families throughout Co Meath. The service is a lifeline for Alanna’s parents Keith, mother Ruth (37) and her siblings Fate Riordan and Harry.

Keith plans to use the monies raised to purchase a new wheelchair-accessible bus for the children in the service, so they can enjoy some days out and get more involved in the community. Last year he raised €70,000 for an accessible extension to their house, so Alanna could have her own downstairs bedroom and shower room. 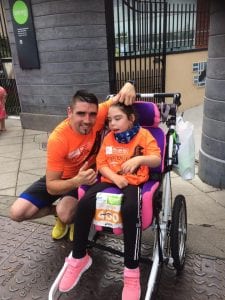 Speaking ahead of the marathon, Keith was urging communities to get behind ‘Team Alanna’.

He said: ”Although Alanna cannot talk, we know that she loves when we run together. She comes into her own and really gets a buzz from it. It all started when she was younger and couldn’t sleep, I’d walk her along the streets in her buggy, sometimes in the middle of the night. It relaxed her when she was anxious, upset or couldn’t sleep. That developed into running and we’ve gone on to do park runs, but nothing like a marathon.”

”Things are getting intense now. We’re coming into the final training stages and our fundraising efforts are going strong. It’s incredible how generous people have been, it never fails to amaze me the strong community spirit that is out there. People are literally willing to do anything to help Alanna and the important cause. I’m urging everybody to donate what they can give”, Keith added. 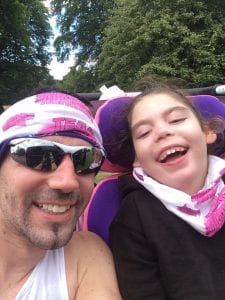 Clare Kean, RehabCare manager of the Meadows Children’s Respite centre, says the Team Alanna campaign has injected a great sense of energy and team spirit in the service. She added that a new bus would help the team to continue to improve children’s lives.

She said: “There is a great buzz around the place, everybody is really looking forward to the event and are fully behind Keith and Alanna. We are confident they will make the finishing line and raise enough money for a new bus. From speaking to all the children and their families, everybody is looking forward to having a new, accessible bus that everybody can use. It will mean we can organise more days out and bring the children into the community, which is where they all love to be. It’s an exciting time.”