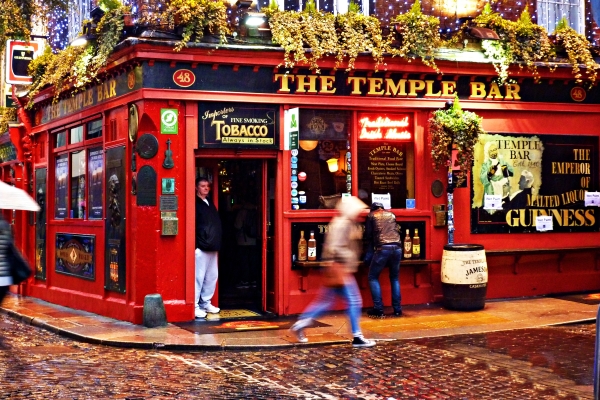 Over the weekend, hundreds of people gathered around Temple Bar in Dublin to enjoy takeaway pints, despite Covid restrictions.

Groups of adults could be seen congregating, with little regard to Covid guidelines, regarding face masks or social distancing. People were also seen holding plastic cups, and some were even sitting on other people’s shoulders.

Photographs from earthcam.com showed huge gatherings of people around the city centre. Three men were subsequently arrested at the scene for public order offences.

Footage also showed Gardaí on the scene as people quickly disperesed from the area.

“Gardai attended the Temple Bar area, Dublin this evening, Saturday 22 May 2021”, a Garda statement read. “A number of persons were gathered in the area”.

“Gardai engaged with those present and the crowd dispersed. Three males, all aged in their 20s, were arrested for public order offences”.

This comes as Dublin’s Green Party councillors are to seek night marshals to monitor activities across popular city spots this Summer. This is in a bid to tackle outdoor drinking and ensure it is done safely.

Councillors said that they want to see these marshals hired for the Summer months, similarly to live music events.

Outdoor socialising is to soar as restrictions continue to be eased following a four month lockdown.

Indoor dining is to resume in July and councillors are also wondering how outdoor drinking and large groups will be tackled.

Gardaí can interevene but do not want to take a heavy handed approach, especially to people who are socialising safely.

“If you go to a festival in the summer, there’s not a heavy gardai presence everywhere you go”, she said. “Behaviour is managed by security staff and marshals, and people directing you to where you need to go”.

“The Green councillors for the Dublin City area have suggested we can bring in daytime ambassadors, welcoming people back to the city, and then night marshals providing a little bit of management to pro-social behaviour”, said Cllr Horner.

“If people are out gathering, they’d make sure the bins aren’t overflowing, reminding people to take their waste with them, notifying the guards if there are gatherings that are getting out of control”, she added. “We’re asking the council to bring in staff to do this”.

Last week, Tánaiste Leo Varadkar said that he felt “really bad” for the number of occasions pubs were told it may be possible for them to reopen during this pandemic.

“I remember the amount of times we told the pubs they were going to open in three weeks”, Varadkar said. “Then we kept pulling it away from them and I felt really bad about that”.

Abortion Referendum Likely To Be Held In May