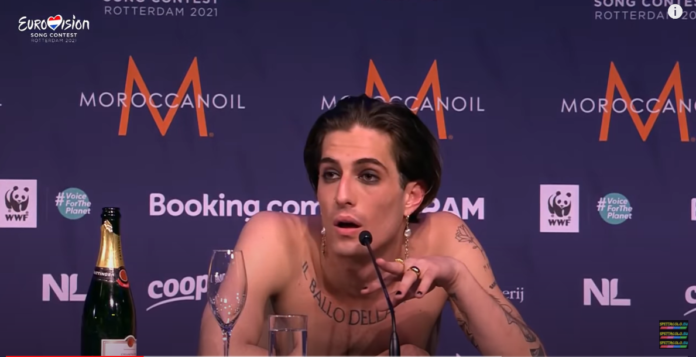 The frontman for Eurovision 2021 winners Måneskin, Damiano David is to take a voluntary drug test after being accused of cocaine use at the ceremony.

The Italian band’s track “Itti e buoni” proved to be the winner of Eurovision 2021, scoring 524 points.

This Eurovision triumph has since been overshadowed by this controversey. A video circulated online, appearing to show Måneskin’s frontman Damiano David snoring cocaine in the green room.

But, Måneskin have claimed that David was leaning over the table to clear up some broken glass.

“We are aware of the speculation surrounding the video clip of the Italian winners of the Eurovision Song Contest in the Green Room last night”, the EBU stated.

“The band have strongly refuted the allegations of drug use and the singer in question will take a voluntary drug test after arriving home. This was requested by them last night but could not be immediately organized by the EBU”.

“The band, their management and head of delegation have informed us that no drugs were present in the Green Room and explained that a glass was broken at their table and it was being cleared by the singer. The EBU can confirm broken glass was found after an on site check”, they added.

“We are still looking at footage carefully and will update with further information in due course”.

The song contest itself was attended by 3,500 people in Rotterdam as part of the Dutch Government’s trial for the safe return of live events.

“No cocaine please, do not say that”- Eurovision winner denies claims

During a press conference, following the incident, David was quizzed about the video.

Måneskin later took to Instagram to jump to their frontman’s defence.

They said they were “really shocked about what some people are saying Damiano doing drugs”.

“We really are AGAINST drugs and we never used cocaine. We are ready to get tested, cause we have nothing to hide. We are here to play our music and we are so happy about our Eurovision win and we wanna thank everyone for supporting us”, they added. “Rock’ n Roll never dies. We love you”.