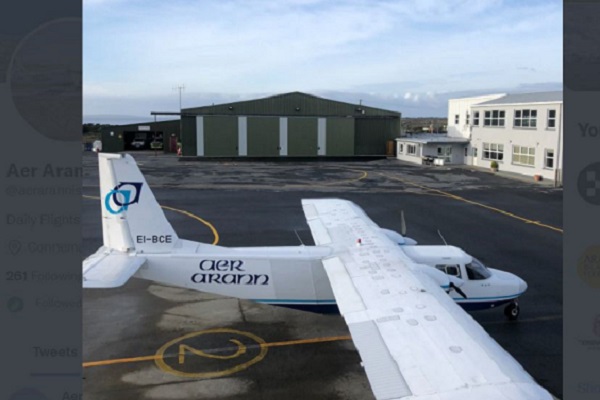 It has emerged that the shortest flight in Ireland, can be found in the form Aer Arann’s commercial flight from Connemara to Inis Meáin, in the Aran Islands.

The flight itself, can make this journey in 10 minutes. The flight can also take eight passengers at a time.

With only eight passengers on board, the plane also waits for people who are running late and trying to catch the flight.

Covering a distance of roughly 18km, the total time between take off and landing takes 6 minutes, to be exact.

All Arann flights Inis Mór, Inis Meáin and Inis Óirr have all been served by the same flight company for 30 years.

“No one ever believes this part”

This little nugget of information has gone viral after Irish blogger for TikTok Sarah Hanrahan, posted about her journey with the flight company online. This video has gone viral, gaining over a million views.

“My parents live in Inis Meáin – which is the middle island of the Aran Islands off the coast of Galway”, she said.

“I fly over when I go to visit them. When I share it on my Instagram, I get lots of questions. So, I thought I’d elaborate here”.

Filming the airport, Hanrahan had added, “This is the airport. No one ever believes this part. This is me getting weighed with my dog”.

“My dog comes with me. He sits on my lap and they need to even out the weight on the flight so it doesn’t… I don’t know, fall out of the sky…”

“It’s an eight-seater plane and the flight takes six minutes. Someone has to sit beside the pilot to even out the weight”.

“You don’t need a passport” for this flight

Sarah Harahan even revealed that the plane did indeed stop to collect a stranded passenger.

“Here we are about to take off but then someone comes late to the airport wants to grab the flight so we tailback”, the blogger added. “We’re already on the runway, we drive back to collect her”.

She also added, “And we are off. I’m in the back row which means I’m right in front of the luggage”.

“Your luggage doesn’t specifically get weighed. You don’t need a passport”.

Reacting to this news, many people have been saying the same thing, that this could only happen in Ireland.

“Only thing that worries me is being weighed publicly”, one person wrote.

Another added, “Stopping to go back & collect the late passenger is absolutely hilarious! This would genuinely only happen in Ireland”.

Sarah was quick to reassure fans, “My dad tells me they used to shout your weight out loud but thankfully now they’re a bit more discreet”.

These flights cost €35 for an adult single ticket. It costs €20 for those living on the island.