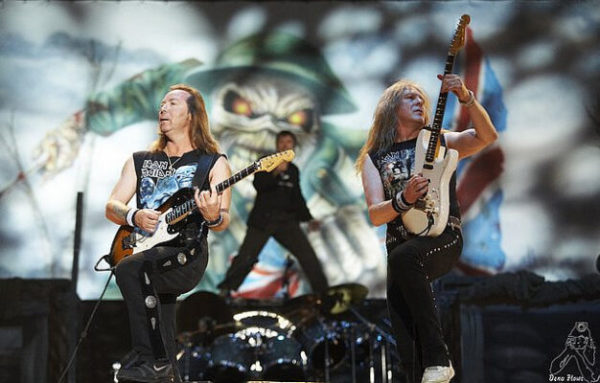 Iron Maiden have joined forces with BrewDog to release their own craft beer Hellcat. Hellcat is a 6% ABV India Pale, crafted in the US. It will be availble to buy in September.

Hellcat becomes the latest edition to Trooper which is Iron Maiden’s steadily growing selction of beers. Launched in 2013, Trooper has gone on to sell over 25 million pints across the globe. It also includes a range of lagers, stouts along with IPAs and more.

The beer is also described as having a “citrus flavour with no less aggressive malty backbone”. It is also entirely carbon negative, a sustainability practice designed to remove more carbon from the environment.

“We’re thrilled to partner with a world-renowned rock band like Iron Maiden. Iron Maiden, like BrewDog, have maintained their spirit of independence throughout their stellar career. Hellcat is a hop-forward lager with a golden hazy appearance and crisp finish, an epic beer worthy of this massive collaboration”.

Iron Maiden’s singer Bruce Dickinson explained that he has been a long-time admirer of the company BrewDog. Dickinson also praised the company for the “respect” they showed for the band.

“I’ve long been an admirer of BrewDog, not just because of their beers, but also of their attitude and style”, he said.

“When I met the BrewDog team, we discovered the respect is mutual, and that we could make an undeniably unique beer together”.

Last month, we also brought you the news that Iron Maiden were teaming up with West Ham United Football Club on a new away kit and training range.

The fans’ reactions were amazing with huge engagement on social media”, she added. Check out that story for more here.