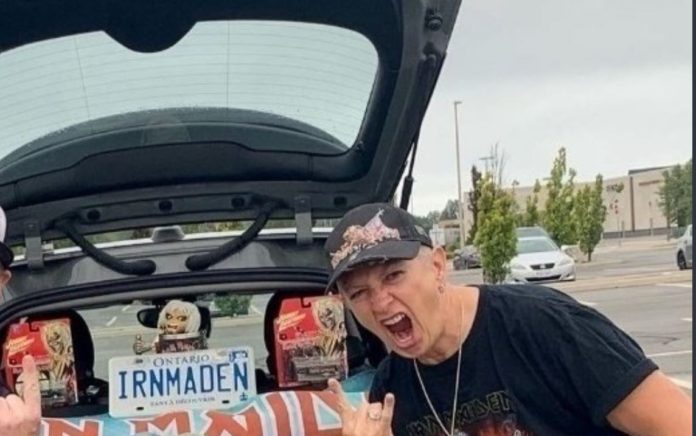 A self confessed Iron Maiden loving high school principal will keep her job, despite calls from “concerned parents” for her dismissal.

The principal in question, Sharon Burns faced the wrath of parents calling for his dismissal via a petition after she shared two images on social media.

One of these images depicted her in front of an Iron Maiden banner and license plate, while displaying a “horn up” gesture. The second photo shows the Eden High School principal sitting beside a handwritten note “Eddie 666” inside a love heart. This is in reference to the Iron Maiden mascot Eddie “The Head” and their track “Number Of The Beast”.

In a petition launched on Change.org, a group of parents said that they were also “deeply disturbed that the principal assigned to the school blatantly showed Satanic symbols and her allegiance to Satanic practices on her public social media platforms where all the students can see them under”.

This petition which has since been closed, reached 553 signatures. However, a counter petition was also launched. This was titled “We Need Mrs Burns”. This hit 23,000 signatures.

The Chief Communications Officer for the District School Board of Niagara is Kim Sweeney. Sweeney also confirmed that Iron Maiden lover Sharon Burns would remain in her role.

Sweeney told the National Post, “As you can imagine, Principal Burns, like all of us, is quite surprised by how her Instagram post led to two petitions and grew to be a topic of interest around the world”.

“We know Ms. Burns as a passionate and dedicated educator who is happiest when she can focus on and connect with her students”.

Sweeney also said that the school board spoke to Burns and the parents. They added that “the issue is over as far as the board is concerned”.

Iron Maiden fans Burns has since removed both posts from her social media account.

Meanwhile, the real Iron Maiden announced their first new album in 6 years, back in July. More on that here.