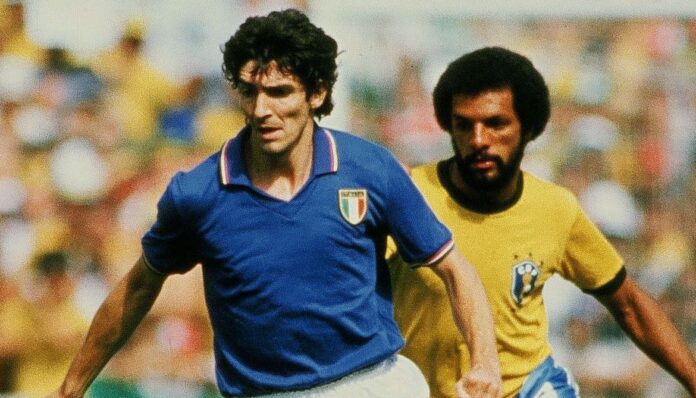 Italy World Cup legend Paolo Rossi has died at the age of 64. TV channel RAI sport have announced the passing of the former Juventus striker, who won the Golden Boot and Golden Ball at the 1982 tournament in Spain.

Rossi famously scored six goals in that World Cup, including a hat trick against Brazil and the opening goal in the final against West Germany.

The Azzurri icon has battled lung cancer for some months.

The striker led Italy in the 1982 World Cup, in particular in the elimination stage, scoring a memorable hat-trick against Brazil, a double versus Poland, and a crucial goal in the Final against the then West Germany.

He was the national team’s top scorer in World Cup history with nine goals, tied with Roberto Baggio and Christian Vieri. He spent his prime years with Serie A giants Juventus.

Rossi was born in the town of Prato in 1956, was an old-fashioned clinical striker that lived in the box. He played for Como, Perugia, and became a legend with Vicenza before joining the Bianconeri, where he won two Scudetti, a European cup, one Cup Winners Cup, and a Coppa Italia.

He took home the Ballon d’Or in the magical year of 1982 for the Azzurri and was Serie A’s capocannoniere (top scorer) in the 1977-78 season. He finished his career with AC Milan and then Verona.

Rossi became a folk hero with his incredible performances in ’82, especially as their seemingly victory had significance also outside of football as it helped Italy get out of the so-called Anni di Piombo (“Years of Lead”) a lengthy period characterized by political terrorism, and embrace the light-heartedness of the ‘80s.

He was a pundit in TV stations Rai and Mediaset in the last few years. He is survived by his wife Federica and three children, Sofia Elena, Maria Vittoria, and Alessandro.

A true Azzurri hero has left us. Ciao Pablito, and thank you for everything 💙 pic.twitter.com/CyaNayTHml