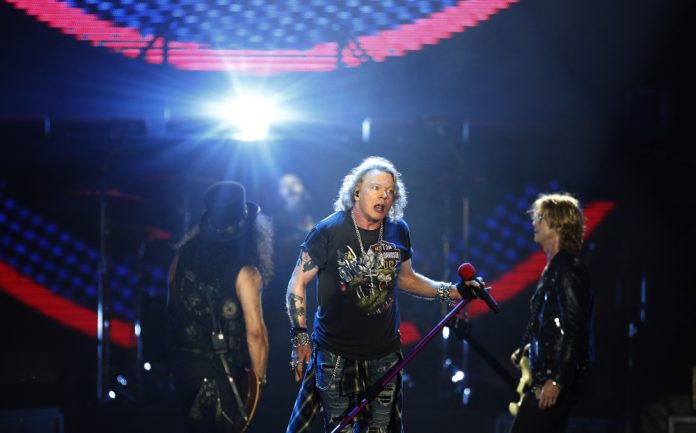 Vocalist Axl Rose, guitarist Slash and bassist Duff McKagan got back together in 2016 and then hit the road on the mammoth Not In This Lifetime tour.

Original drummer Steven Adler played two shows with the band in 2016, but in February last year a back injury sidelined him from further appearances.

In a new interview, Niven says that Stradlin also could have taken part in some shows, but decided to walk away,

‘He did get as far as flying out and doing a soundcheck and then he left after the soundcheck,  he didn’t want to have anything to do with it.’

When asked when that was, Niven said,

‘Last year. It was somewhere out in the Midwest when they were doing stadiums. Obviously, had it gone well and everybody had been happy, and there had been a little bit of brotherhood, I’m sure he would have stayed with it. But something must have really upset him because he left after the soundcheck and never turned up for another one or an appearance. I would think right now, he’s probably a little pissed off.’

Stradlin, for his part, has pretty much avoided commenting publicly on his absence from the reunion lineup. He claimed in one tweet, that was deleted, that the band ‘didn’t want to split the loot equally.’

Guns N’ Roses will headline this year’s Download festival in the UK and will play other dates across Europe this summer.

Here’s the interview in full