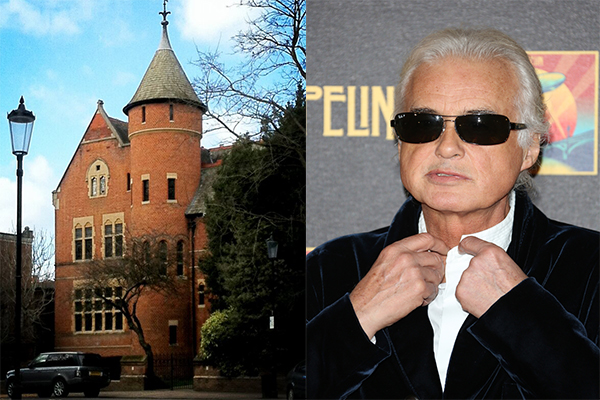 Jimmy Page has become embroiled in yet another dispute regarding renovations being carried out by a neighbour.

As was previously reported, the Led Zep guitarist had an issue with pop singer Robbie Williams who wished to construct an indoor swimming pool next door to Page’s abode. The guitarist lives in a Tower House, which is a historic 1875 mansion since 1972.

Now, Page is irked that former chairman of Prudential Sir Harvey McGrath wants to move a wall as a means to install four air-conditioning units in his home. Page has written a letter to the Kensington and Chelsea Council Planning Committee regarding his neighbour’s renovation plans.

Page maintains that noise from construction could affect his work in a studio he built on his premises. According to the Daily Mail, Page wrote to the council,

“I urge the council to refuse the application as having the potential for harmful impact on living conditions in the Tower House. I use the area to listen to and scrutinize recordings, requiring my full concentration with no distracting noise and/or vibration from other sources, for meetings away from the main house and for recorded interviews where naturally there cannot be any constant background noise.”

The Led Zeppelin guitarist lost a long-running five-year battle with Robbie Williams back in December. According to UCR, Page had argued that construction could impact the foundation of Tower House, a Grade I-listed building. T

The committee approved Williams’ plan, but with the condition that vibrations and ground movement be limited and monitored. The former Prudential chairman of the committee also suggested that the two stars meet in person to resolve their dispute.