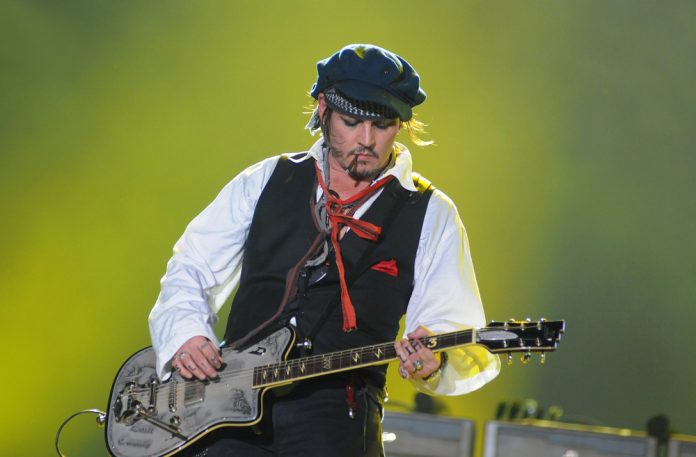 Depp played two songs with the San Diego band, including a cover of MC5’s ‘Kick Out The Jams’.

Depp has been engaging with his passion for music again recently, with the movie star performing with Marilyn Manson. Depp starred in Manson’s recent video for ‘KILL4ME’ and has also formed a supergroup called Hollywood Vampires with Alice Cooper and Joe Perry from Aerosmith. The band are set to perform in the UK in June.

On Friday night ( March 2nd) the actor joined Stone Temple Pilots on stage in Santa Clarita, CA for his latest live performance. Depp and the band played Stone Temple Pilot’s ‘Sex Type Thing’, before blasting a cover of MC5’s ‘Kick Out The Jams’ – with MC5 member Wayne Kramer also joining in.
Advertisement
Depp has been flirting with musicians for quite some time now. He featured on Shane MacGowan’s 1995 debut solo album The Snake . As well as contributing ‘guitar weird noises’ to the album he also featured in the video for the same song.

Hollywood Vampires are set to perform in the UK in June. Here’s a not half bad attempt at Motorhead’s Ace of Spades in tribute to the late Lemmy Kilmister.