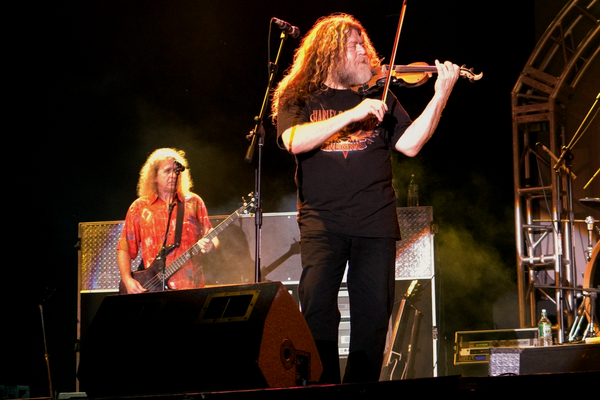 Robby Steinhardt, the co-lead vocalist and violinist with the band Kansas, has passed away aged 71.

News of Steinhardt’s death was confirmed by his wife Cindy. She said that he was admitted to hospital with acute pancreatitus. She also revealed that he ultimately suffered from sepsis and passed away.

On the night he was admitted to hospital, Cindy also confirmed her husband suffered from a septic shock. According to her, Robby then went on “to spring back much to the amazement of his entire medical staff”.

However, he then suffered from sepsis once again on the day he was to move to a rehabilitation centre.

Steinhardt had joined Kansas after they were formed in 1971. The band were performing under their original name White Clover at that stage. After leaving the group in 1982, he returned for a string of studio and live recordings in 1997.

He left the band for the second time in 2006. Lead singer Steve Walsh described this as “one of the most difficult things we’ve ever had to do”.

Speaking about her husband’s plans for new music and a tour, Cindy Steinhardt wrote on Facebook, “We are beyond devastated as our lives were about to start a new adventure”.

“Robby just recorded his first solo album with the talented music producer Michael Franklin at Solar Studios”, she continued.  “A tour to start in August, Robby was so looking forward to being back on stage doing what he loved”.

Paying tribute to Steinhardt, Kansas also wrote, “We love him and will miss him always”.

“Robby will always be in our souls, in our minds, and in our music”, they added. “What he brought to us as bandmates, to the fans who attended our concerts, and to the sound of KANSAS, will always be heartfelt”.

Other musicians have also paid tribute to Steinhardt.

Dream Theater founding member Mike Portnoy also added, “So sorry to hear of the passing of Robby Steinhardt of @KansasBand, he was such a big part of their sound on those early classic albums”.

So sorry to hear of the passing of Robby Steinhardt of @KansasBand…he was such a big part of their sound on those early classic albums 🎻 #RIPRobbySteinhardt pic.twitter.com/OPQ5lQWFAr

Age of Electric’s Todd Kerns also wrote, “Very sorry to hear of the passing of Robby Steinhardt, founding member of @KansasBand”. Had the good fortune to meet him several times. He was a great man. Thinking of his family”.

Very sorry to hear of the passing of Robby Steinhardt, founding member of @KansasBand Had the good fortune to meet him several times. He was a great man. Thinking of his family pic.twitter.com/i0VKa4QDPh