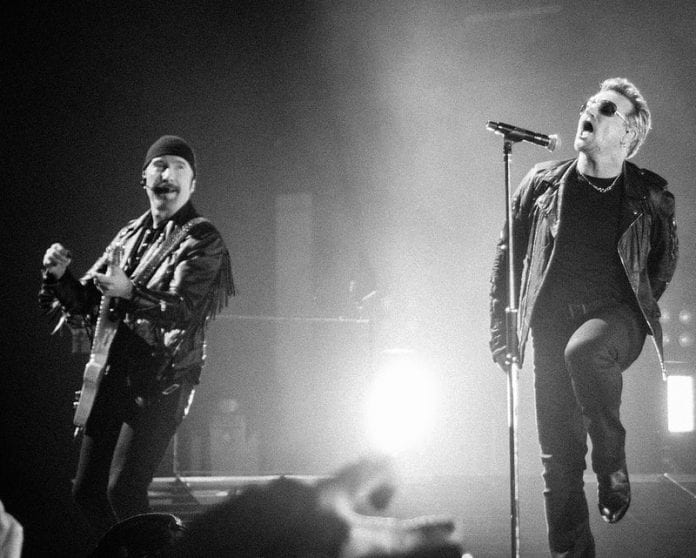 James Cordon wants U2 to partake in a little karaoke!

Cordon hosts the U.S Late Late Show. A recurring segment of the show, Carpool Karaoke sees Cordon invite famous musical guests to sing along to their songs with him whilst he is driving on a planned route in Los Angels.

The Red Hot Chili Peppers (check out the hilarious car ride here); Lady Gaga, Chris Martin, George Clooney and Julia Robert are just a few of the famous names who have ridden shotgun with Cordon.

There was also the memorable special segment recorded with the late George Michael for Comic Relief.

“Ben Winston and I always thought there was something very joyful about someone very, very famous singing their songs in an ordinary situation.” Says Cordon, “We just had this idea: Los Angeles, traffic, the carpool lane — maybe this is something we could pull off.”

Now it seems Cordon wants to give U2 a lift. A show insider revealed to The Sun: “James is a big U2 fan and knows having them for Carpool Karaoke would work really well.

“Schedules have been hectic, but with U2’s new tour coming up, the production team are currently working out timings and logistics.”

The Dubliners hit the road this summer to celebrate the 30th anniversary of their Joshua Tree album. The tour will kick off in Vancouver in May and U2 will of course be home, July 22nd to take to the stage for their sell out gig at GAA headquarters, Croke Park.

The “sweetest thing” is, some of Corden’s most popular Carpool Karaokes saw the comedian travelling to meet the stars, so it looks like James is willing to come over to Dublin for the day to film on the city’s roads. But with the Cross City Luas works what route could they take? Fingers crossed it comes to fruition, we would love to catch a glimpse of U2 driving down the quays with Cordon.

Rod Stewart At The 3Arena This December All You Need To...