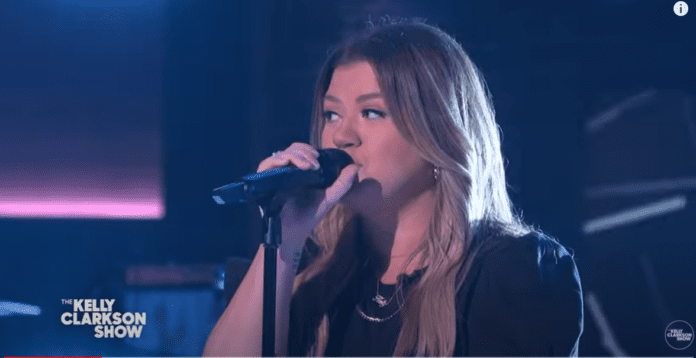 Singer, Kelly Clarkson delivered her own cover of the Foo Fighters’ track “Times Like These” on a segment of her talk show this week. Check it out here.

Clarkson performed the song during the “Kellyoke” segment on her talkshow, The Kelly Clarkson Show. She did this segment accompanied by her band Y’all.

As well as the Foo Fighters, Kelly has also delivered covers of Aerosmith’s “Dream On” and “Mr Brightside” by the Killers. She also covered “Juice” by Lizzo.

Last November, Tegan and Sara also performed “Make You Mine This Season” on the Kelly Clarkson show.

Kelly Clarkson’s last album was “Meaning of Life”, released in 2017.

Foo Fighters with a cover of their own

This comes after we brought you the news that the Foo Fighters produced their own cover of “You Should Be Dancing” from the Bee Gees.

Speaking on this show recently, the Foo Fighters frontman, Dave Grohl hailed Kurt Cobain as the “greatest songwriter of our generation”.

Grohl and Cobain were bandmates with Nirvana until Cobain’s death in 1994. Grohl was devastated to lose a bandmate and close friend.

Speaking on “Medicine At Midnight Radio”, Grohl said this, “It is one of my life’s greatest heartbreaks that Kurt isn’t still here to write more amazing songs because it’s pretty clear that he was blessed with a gift”.

He added, “I think it’s safe to say that he was the greatest songwriter of our generation. I’m very proud to say that I got to be his drummer and play those songs every night”.