Home Classic Albums King of Leon – Only By The Night 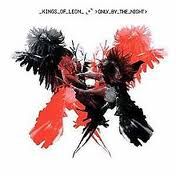 Only by the Night is the fourth studio album by Kings of Leon. It was released worldwide in September 2008 and experienced commercial success, peaking inside the top 10 in over 10 different countries. The album was certified the best-selling album in Australia, certified nine times platinum. It also went on to be the highest selling album of 2008 in Australia, the third best selling album of 2008 in the UK, winning two Brit Awards, and the 18th best-selling album of the 2000s in the UK. Furthermore, two singles from the album have found high chartings, “Sex on Fire” coming in at number one in Ireland, the UK, Australia, and on the United States’ Hot Modern Rock Tracks, and at number two in New Zealand. The album’s second single “Use Somebody” also charted at number two in the UK, and at number two in Australia, along with being the band’s first top 10 hit in the U.S. The album was nominated for Best Rock Album at the 51st Grammy Awards with the song “Sex on Fire” receiving two nominations itself.

“Crawl” was released via the band’s website as a free download for a short time, although it was not the first proper single. The first single “Sex on Fire”, was released on September 15, 2008. The music video for “Sex on Fire” was later made available to stream on their website and YouTube channel. The song “Use Somebody” was announced as the second single, which was released in December 2008. The song was a massive hit in the United States, peaking at #4 on the Billboard Hot 100, and was a hit in the UK, Australia and several other countries. The third single released from the album was “Revelry”, released on March 2, 2009.

“Notion” is the fourth single from the album. The video was released on June 1 and the song appear on radios on June 29. The song has been another success from the group, peaking at #1 on the Billboard Alternative Songs.

All songs written by Kings of Leon; produced by Angelo Petraglia and Jacquire King unless otherwise specified.